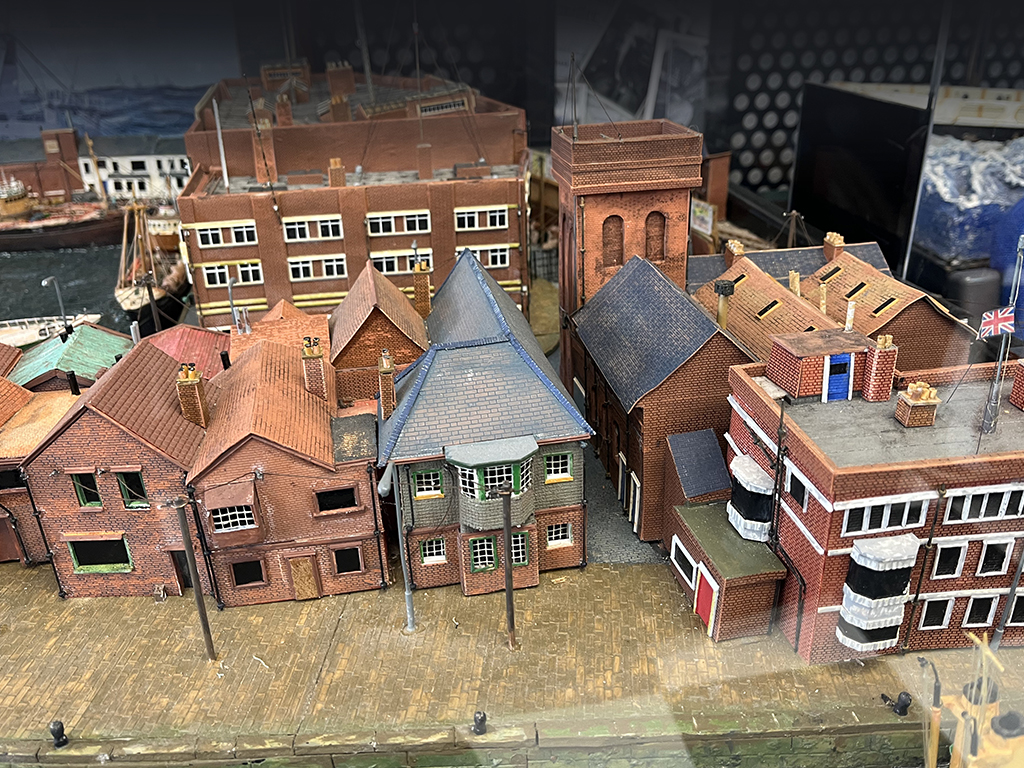 After a remarkably detailed diorama of the old St Andrew’s fish docks was donated to the Hull Fishing Heritage Centre, Brian W Lavery paid a visit to the exotic – but misleadingly named – Holderness home of its maker…

When I tapped the postcode for Green Island into my satnav I expected to be led to a wild, isolated, sweeping vista in keeping with the fishing-ground feel to the name.

When the robotic voice told me that I had arrived at my destination – I felt I had to check.

The robot was correct. No rural wilderness – just a rather nice suburban house in Bilton with a row of sheds and a garage alongside.

I parked on the double-fronted driveway and was met by a slim, elderly man of average height, wearing a baseball cap, lumberjack shirt and slacks, all of which were paint-spattered. This led me to assume he was a busy man.

With his hand outstretched, he said: “Hello, I’m Ron. Follow me.” I follow for about 20ft and then carefully duck to prevent hitting my head on the top of the door frame of the metallic green shed, one of a row of four adjacent to the large garage.

My assumption was correct. On the floor was a replica scale RNLI lifeboat and opposite a workbench with a model interior of the lifeboat on it. Ron Paddison was clearly busy.

I was soon to find out that he was always busy.

“I’m getting the lifeboat ready for a talk I am giving to an air cadets troop run by a mate of mine.”

He went on to explain how the models he has built over the years have featured at many charity events. Ron also gives talks to interested groups – and runs a free repair service for neighbours who bring all sorts of things to him for repair.

But his real passion is building and showing the model craft he has built over the past 21 years.

“It really all started when I retired early at 61, after years as a steel fixer. I like to keep busy,” Ron said.

And then in passing he added: “It’s my birthday today, so it’s exactly 21 years I’ve been doing this.”

Ron’s latest donation to charity is a detailed diorama of the old St Andrew’s Dock in its heyday. The exhibit, called Respect, now sits in the Hull Fishing Heritage Centre in Hessle Road, in the heart of the fishing community.

A survey in 1954 showed that for every man at sea on a trawler, a further three were ashore. It was estimated that around 50,000 people – or one in three of the city’s population – depended on the industry until its rapid decline in the mid-to-late 1970s in the wake of the Cod Wars.

At it peak, St Andrew’s Dock housed the infrastructure of fishing too, with fish processing, netmaking, painting, engineering and shipwrights.

Its heart was the Lord Line building, built in 1949, which housed the offices responsible for what was once the world’s biggest deep-water fishing fleet.

The docks and the buildings that sustained it were well known to Ron. His dad Sam “Paddy” Paddison was a taxi driver, which was a key role in the industry then. Many trawlermen had their own drivers when on leave, who went everywhere with them – even to the pub – and the parties that followed.

And the men ashore, nicknamed the Three-Day Millionaires, were always generous. Some cabbies spent days with their customers! But Ron also has a deeper-rooted reason for his unique tribute to and respect for the industry and the men who served in it.

Two of his brothers-in-law, Leonard Hall and Arthur Holmes, both worked all their lives in fishing. And in 1968, Ron lost his pal, Alan Harper.

Alan was the third-hand of the Ross Cleveland, the third ship to perish in the Triple Trawler Disaster of that year when the St Romanus, Kingston Peridot and Alan’s ship were lost in less than a month.

Ron’s friend was in the wheelhouse of the Cleveland with Mate Harry Eddom when she went over.

Just minutes earlier, the Cleveland’s skipper issued this desperate radio message: “I am going over. We are laying over. Help us, Len. I am going over. Give my love and the crew’s love to the wives and
families…”

Seconds later the ship disappeared off the radar of other vessels that had been trying to assist. (Eddom was the sole survivor of the disaster.)

Ron said: “Although I never went to sea myself I knew those that did – and I lost a dear pal.

“I knew that area inside out and remember my dad taking me with him when I was a lad. “That’s why I decided to pay my own tribute.

“And I think the Hull Fishing Heritage Centre is the ideal permanent home. Jerry Thompson [the HBHG chairman] and all those fisher lads there do a great job.”

Ron also donated a scale model of the Hull trawler Arctic Cavalier, which is displayed at the centre near the diorama.

That model ship is displayed in three parts to reveal the detail of her interior from the skipper’s cabin to engine room – everything is replicated as it would have been when the ship sailed.

The deck lifts up to show below-decks and in turn the engine room, galley and accommodation in the most minute of details.

“It’s all about detail,” Ron said. “And not only does it look it exact, but the vessels I recreate actually work.”

He added: “When I do these talks, especially for kids, I emphasise the importance of recycling.

“Everything I make is made from stuff that would normally be thrown out by most folk. I like to repurpose
things.”

Ron points to a scale replica of a MAN diesel engine gine, which was used to power an RNLI lifeboat.

It is in a glass case in the centre of his living room, which is now his central workshop.

It is surrounded by sections of model lifeboats, speedboats and a full model of a US Coastguard vessel.

Ron switches on a little battery-powered box that makes the engine come to life.

“I can show the kids, or whoever, that the models are working – but more importantly I get to tell them about recycling.”

In his hand Ron has a cardboard from a tinfoil roll, surrounded by gauze and coated with plaster of Paris. He points to the engine again.

“This is what the exhausts are made of – and the bit that links it to the engine at the side is made from a little plastic eye dropper bottle that my wife used to use.”

He then held another of his wife’s eye drops bottles next to the case for comparison.

He paused momentarily – and said: “I lost my wife in 2019. We had been married for 58 years and had been together for 65 years in total. We knew each other from school.

“We travelled the world dancing together; ball-room, line-dancing… you name it. My Eth – she never liked to be called Ethel – was the world to me.

“The best wife a man could have. We shared a love of music and dancing and supported each other in our other interests too.’

Eth was a member of the St John Ambulance.

“She saved four lives using the training that she got during his time with them,” Ron told me.

He added that he still followed his other hobby, but nowadays he attends dancing clubs for company only – and to help repair things for friends and neighbours.

And of course he remains actively involved with the Hull Model Boat Group, which raises money for charity with shows across the country.

“It keeps me busy. I never made any models before I retired but my Eth said I should get a hobby alongside dancing and it just grew from there.

“Folk are always bringing things in too, for repairs, like bikes, old heaters, fans – all sorts. I get them ﬁxed and give them to those that want them.”

Our conversation is interrupted by Dave and his wife from the line dancing club. They have dropped by with a birthday card and a promise to take Ron out for a meal.

Shortly after they leave, Ron’s grandson and his mum are at the door with a card and gift and promise to come back soon.

“There will be folk in and out all day,” Ron said. “I have a lot of great neighbours here. We just all get on.”

Ron went on to tell me how they all rallied to support him after Eth’s passing. It is clear he is a very popular man in Green Island.

He returns with enthusiasm to his models and says he is looking forward to his next talk, scheduled later this month with a local air cadet unit.

The US Coastguard vessel behind the sofa has been shown around the country and was mostly completed in 2019. The diorama was ﬁnished in 2013 and was on display across the country too, before ﬁnding a permanent home at the heritage centre – similarly with the Arctic Cavalier built in 2002.

Each one took up to 4,000 hours across several years to complete and there are more on the way.
I leave Ron to get back to being busy.

He diverts me brieﬂy into a little box room on the way to the front door.

In it there are four refurbished cooling fans and three electric radiators awaiting collection from those “folks who need them”.

I can’t help but agree.

Ron is just one of those life-affirming folk… and it turns out that he’s not only a fine maritime model maker, but also something of a model citizen.