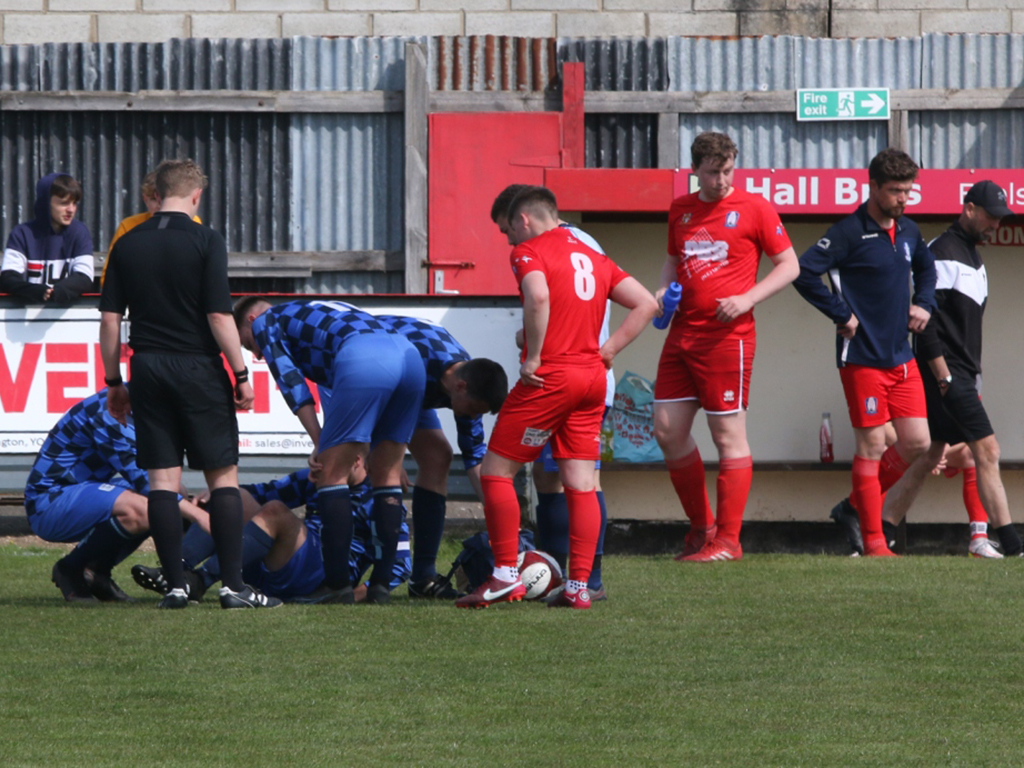 After another weekend of ‘bad news’, there’s a growing feeling among management and players that the end of the 2021/22 football season can’t come soon enough!

Not only were both Saturday teams beaten again last weekend, but the firsts also saw player/coach Luke Jeffery sustain a broken leg just before half-time in the 2-0 defeat at Bridlington Town Rovers, following a challenge that left his manager and team mates particularly disappointed.

Jeffery was caught by what manager Craig Foster termed a “really, really poor challenge” from Town’s Kieran Jordan. Although conceding that “the lad probably didn’t mean to hurt Jeffers”, Foster said, “He came in from the side two-footed and caught him shin high. How the referee doesn’t deem that reckless is beyond me”.

To the amazement of the manager and Jeffery’s team-mates, Jordan escaped without so much as a yellow card, a fact that even surprised the home manager, who was apparently preparing for the worst. Perhaps the fact that Jeffery was sitting up in the moments immediately after the incident, led the ref to believe it wasn’t too serious – the nearby hospital would soon confirm otherwise.

While our best wishes go to Luke for a full and speedy recovery, for his team mates, the task now is to get the point required from this week’s home game against Hutton Cranswick SRA that would ensure Goole United will finish bottom of Humber Premier League Division 1.

Goole’s 4-1 defeat at Hutton Cranswick in their final league game last Wednesday means they can’t improve on the 16 points that they and the Eastenders have already amassed, with their worse goal difference leaving them bottom. However, back-to-back 2-0 away defeats over the past fortnight have reduced Easington’s margin for error.

Adding to a confusing picture at the foot of the table is the complete lack of news over the aborted fixture against Driffield EI that didn’t take place as scheduled on 26 March. Should the locals manage to repeat their recent win over Hutton Cranswick this Saturday and have their appeal for the points from the Driffield game upheld by the league, Foster’s side would actually finish above the Wolds side too.

Squad-wise, in addition to the unfortunate Jeffery the locals are without Adam Jamieson, Liam Murrey and Jack Wright. Suffice to say that Foster, along with assistant Craig Smalley, will hope to be able to count on returns for the likes of skipper Kris Fitzpatrick, Billy Symes and Darrel Thompson in order to plug the gaps.

Following Saturday’s ‘final’ league game, the locals are set to be involved in the South Holderness Cup next Tuesday at Patrington. With just four teams having entered this year, two semi-finals will take place on Tuesday side-by-side in a ‘double header’, with the final taking place the following Friday. At time of going to print the identity of our opponents isn’t known, with the other three teams being AFC Skirlaugh, holders Hedon Rangers and Withernsea.

Elsewhere last Saturday, the Fourth team ended their ER County League Division 7 campaign with a 6-2 loss at fifth-placed Goole United Academy. It was a disappointing outcome given that the locals had led through a Charlie Ashwell brace up until the final moments of the first half.

As mentioned in last week’s piece, Sunday’s scheduled Vets League Division 5 cup-tie at Holme Rovers was switched to last night (result unavailable at time of going to print), with the winners set to travel to Swanland in the semi-finals this Sunday.

Away from the action, Saturday’s latest Coffee Morning in aid of club funds raised £132.00, which will be used towards the forthcoming 75th Anniversary event.

Tickets for the aforementioned event are currently on sale, priced £40 each and available from either Daniel Campbell (07794 572250) or Stuart Campbell (07792 770475). The function takes place in the Circle Restaurant at the MKM Stadium on Saturday, 24 September, with guest speaker being the former Newcastle, Liverpool and England star Peter Beardsley MBE, along with MC/comedian John Gillan.

Finally, the club are delighted to announce that its chosen good cause for the 2022/23 season will be WISHH, the official charity of Hull Hospitals, with our fundraising efforts being aimed specifically at Wards 30 and 32 at the Queen’s Centre, Castle Hill Hospital.

This comes after a hugely successful two years supporting Hull4Heroes. Our association with the local veterans’ charity, which had seen us raise £500 towards the Veterans’ Village project, will be ended at our annual presentation evening in the Marquis of Granby on Saturday, 11 June at which we will hand over another cheque for £1,000. During a time in which the club has struggled on the field, it is an immense source of pride that we continue to achieve such excellent results off it!