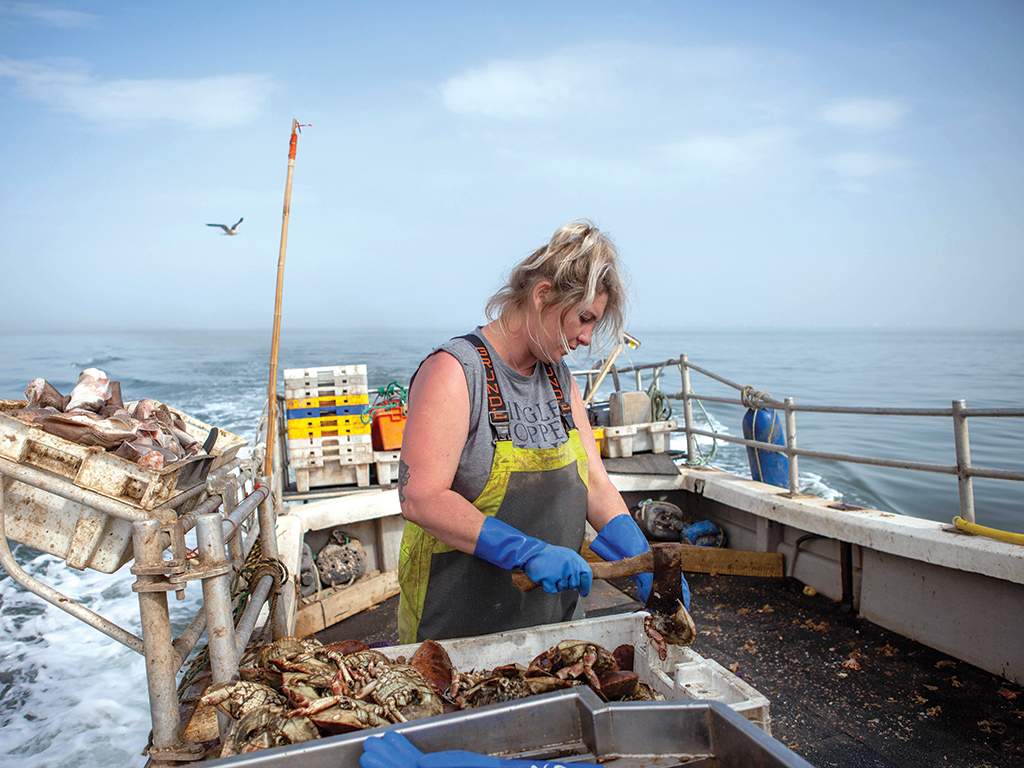 It all started with skipper Karl Price having a good old moan to his friend John Leppington about having to go to sea short-handed – again.

Days later John had a strategy, and a campaign was born.

They approached the Holderness Fishing Industry Group (HFIG) – which represents fishermen from Flamborough down to Spurn – to front the project.

The project aims to attract young men and women into the industry.

Only around a dozen women work on board fishing vessels in the UK and there is just one female skipper.

John Leppington (left) recalled how the campaign began: “Karl and his wife Jenny have spent 20 years building their fishery together. In common with most skippers and owners, they have always had an issue with sourcing crew.

“Karl told me, ‘We can’t seem to get anyone interested. We can’t attract them into the industry, or we have to recycle people’ – that is, use people who you don’t really want to take to sea, but you do – just because they turn up.

“Even worse, he said that more and more folk have gone to sea shorthanded – which is just plain dangerous.

“I told Karl the problem was really down to a knowledge gap.

“Years ago, fishing was discussed in schools, but of late there has not been much of a recruitment drive at all, even though we have the biggest lobster fishery in Europe.

John comes from a fishing family and his dad Vic is a veteran Flamborough skipper.

“I remember being ripped from my bed at 5am by my dad to go to sea – it was what was expected of you. We are from a long line of Flamborough fishing people.”

But he chose a career in marketing and set up his agency – Digital Cookie –in the village.

“I knew we had to do something different,” he said. “So, I decided I would tell stories about the industry
from those who know it best.”

John spent weeks on Bridlington harbour catching skippers and crew to fi lm. He carried out interviews and took aerial photos of the activities on the harbour.

He added: “The films seemed to bottle the essence of the industry and its history as well as telling people what the present is like.

“I wanted to show potential viewers that we are talking about a way of life – not just a nine-to-five, clock-on, clock-off job.

“We are keen to appeal to younger males and females.”

In one video, Jenny Price, who runs a Flamborough fishery with husband Karl, said: “In the USA it is quite common for women to work as crew and skipper boats. And it is changing here too.

“Have a look around Instagram and Twitter and on TV and you will see fishing can be for everyone, if you are capable of doing the work.”

Ashley, 34, has only been in the industry for two years but blogs extensively via Instagram as thefemalefisherman and on Twitter as @FemaleFisherman.

Ashley insists in being called a “fisherman”, saying that is “what the job is called”.

She now owns two boats – so has come a long way in her brief career. She said: “I think the Get a Life project is a great idea and they have been in touch with me to do a video promoting it, which I am looking forward to.

“The industry is not normally promoted for anyone, let alone for women.

Holderness Fishing Industry Group managing director Jamie Robertson said: “If it keeps going like this, I think it could potentially go nationwide.”

He added: “There was a terrific expression of interest. Three people were recruited in just three weeks and three booked to do their Survival at Sea certification. We are all pretty chuffed.”

“It may not sound a big number – but there are only around 150 people directly involved with the fishery which supports about 450 jobs ashore.

“The average age of a fisherman on commercial fisheries is between 45 and 50. We need new blood.

“We need to attract more young people and we certainly need more women.

“The natural progression of course would be for those women to move into the wheelhouse.”

TO VISIT AND REGISTER: