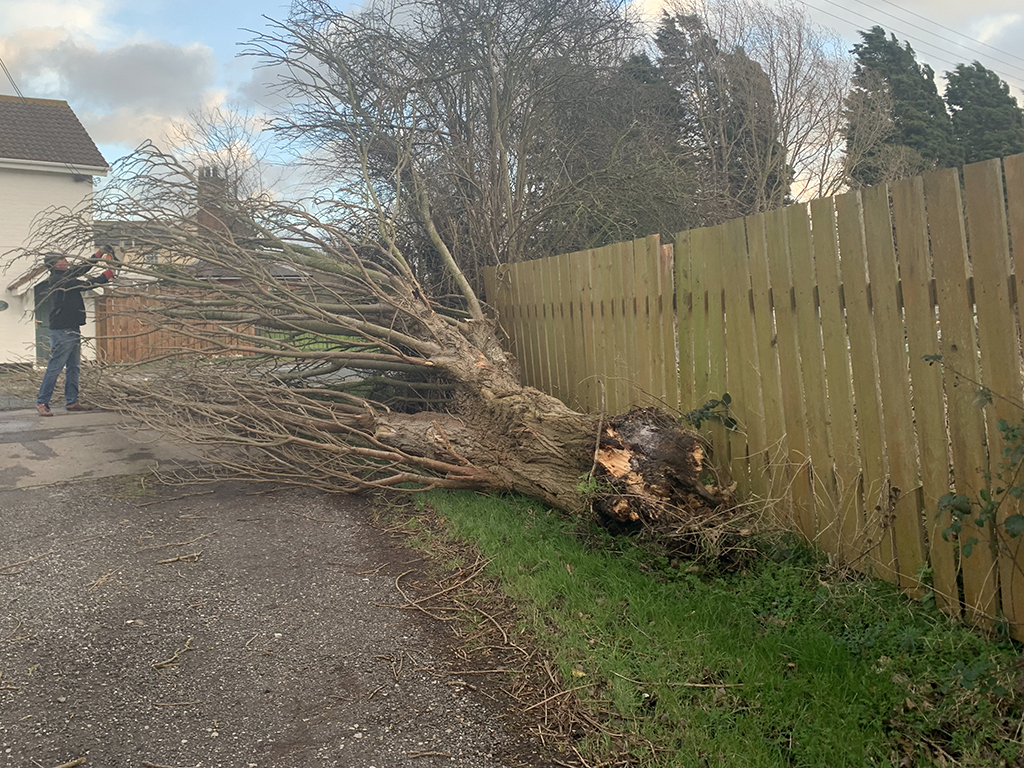 At about 4pm on Friday, February 18, the phone rang.

Like thousands of people around the country, I’d been watching the overnight phenomenon that was Big Jet TV on YouTube, both amused and obsessed by aviation enthusiast Jerry Dyer’s commentary as hugely skilled pilots attempted to land planes in 80mph winds at Heathrow. “Bosh!” he’d say as one touched down. “Easy… EASY! He’s greased that one!”

I looked at my phone. It was my next-door neighbour. I knew this could only mean one thing.

It turned out it wasn’t the house, but one of our trees. “One of them’s gone over, and it’s in the road,” he said.

I rushed outside and soon realised that the tree was blocking the traffic on Station Road – it was only reasonably twiggy bits of tree, and I don’t think it would have caused major injury had a vehicle been passing it at the time, but still. You wouldn’t have wanted to risk scratching your paintwork.

A very kind neighbour from across the way was already wielding his chainsaw and making light work of the now ex-tree; I didn’t really know this neighbour, which made for a bit of an awkward first meeting.

My other half had gone to the dentist and missed all the action – and as he’s still working from home, it was quite ironic as it was the first time he’d left the house in days. But his friend had literally just popped round so between us, and a couple of other helpful neighbours, we cleared the road of twigs and branches in about 10 minutes, and I was heartened when quite a few drivers slowed down to wave thanks in our direction.

I’ve said before that I love living around here, but we do notice the severe weather far more than when we were living in a mid-terrace off Princes Ave in Hull. There was far less that could fall off anything, and we didn’t have any trees. There’s little to break the wind as it whistles across the Holderness plains, and the noise can become incredible. As I speak, Mark from Hornsea’s Southorpe Services is working hard on replacing the wobbly fence that the ex-tree had been holding up and was looking pretty perilous. (I hope he sees this mention; maybe he’ll knock a tenner off the price.)

But there was no real harm done, which is less than be said for those poor people in Beaconsfield, Withernsea, whose bungalow was partially destroyed by Storm Eunice, and some people tragically lost their lives in other parts of the country. It seems as though these storms, oddly named though they are (our correspondent Tim Nuttall, on Facebook, described Dudley and Eunice as sounding like a couple who’d come back from the bingo to show you their slides of Great Yarmouth), are set to become a regular fixture, so we need to be more prepared than ever.