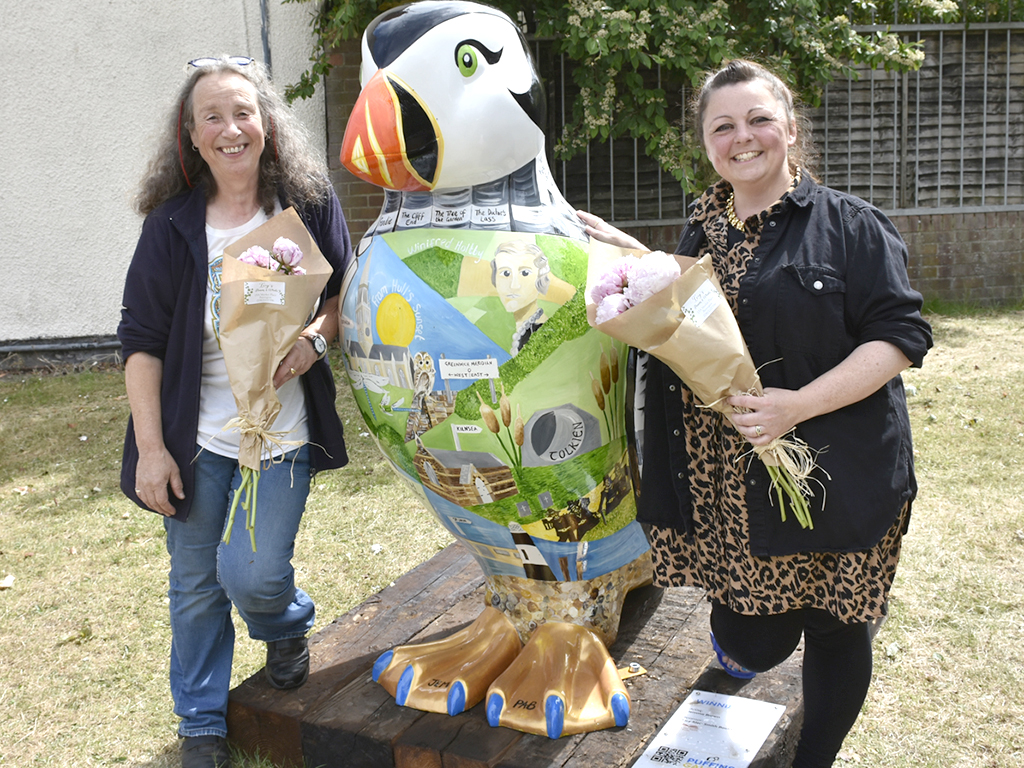 A public art event that makes puffins the stars of stories of conservation, global warming and green energy has arrived in Holderness.

Organisers of Puffins Galore!, a trail stretching along the coast of East Yorkshire, have placed six sculptures in Hornsea, five in Withernsea, and one each in Skipsea, Patrington, Easington and Kilnsea.

It followed the installation of the first puffin at the RSPB centre at Bempton, which is home to almost half a million seabirds that cram on to the cliffs every year. The second puffin was installed at North Landing, Flamborough, with another in the centre of the village and a fourth at Sewerby Hall.

From there the installation team from Hull-based Strata Group – one of the sponsors of the project – headed into Bridlington, where 10 sculptures are displayed. The remaining puffins were delivered to the rest of the Holderness coast, as well as to Hull, Beverley and Cottingham.

On Saturday, July 2, once all 42 puffins are in place, the Puffins Galore! website will officially launch the trail by posting details of every location and pictures of every design.

Rick Welton, co-director of Puffins Galore!, said: “Seeing our puffins settling into their new homes is the reward for months of hard work by so many people involved in the project and we are immensely grateful to all of them.

“There’s the factory in Poland where a lot of the manufacturing had to stop because some of the workers are from Ukraine, the artists across the region who came up with some wonderful designs and fantastic paintwork, the sponsors who have supported the project in such difficult times and the delivery teams who have covered hundreds of miles dropping off plinths and puffins.”

Rick and Puffins Galore! project manager and co-director Clare Huby were both involved in the hugely successful Larkin with Toads in 2010 and the follow-up A Moth for Amy in 2016. The initial investment and support was provided by key partner Yorkshire Coast BID and project partner Visit East Yorkshire with the aim of raising the area’s profile as a tourist destination.

Artists submitted more than 150 designs in response to a brief setting out three core themes of endangered wildlife of the coasts and seas, the global warming crisis and the growth of green energy, and people and stories of the East Yorkshire coast. Sponsors and partners include businesses and other organisations from across East Yorkshire and further afield.

Patrington’s puffin, named Winnie, was designed by west Hull artist Jemma Brown and sponsored by book dealer Alex Alec-Smith. The artwork on Winnie depicts the rich literary and historical connections in the area, such as Winifred Holtby, JRR Tolkien, the Gunpowder Plot (Welwick) and the area’s geographical location, including the Greenwich Meridian and Sunk Island.

Jemma said: “It has been a labour of love painting it – it is nice to see it finally in its location.”

Florist Helen Heeley, who has a shop next to the puffin and has been given the job of Puffin Pal – which entails keeping a regular eye on the sculpture – presented both women with a bouquet as a thank you.

In Hornsea, the Hornsea Hub has sponsored the Percy Puffin Litter Picker sculpture, designed by Amanda Quellin, while Cranswick Convenience Food has sponsored Sea Heroes, by Wall Things Bright and Beautiful, which is in the Promenade Gardens. Other puffins are located along the Promenade and in the Floral Hall sensory gardens.

Clare Huby said the puffins would remain in place until the end of October before being sold either to their sponsors or at a grand charity auction which will raise funds for Hornsea Inshore Rescue, Yorkshire Wildlife Trust, RNLI and the RSPB.

Kerry Carruthers, chief executive of Yorkshire Coast BID, said: “The talent involved in designing the puffins alone is worth celebrating, and we encourage everyone to make the discovery of these a must-do activity this summer.”

To find out more about Puffins Galore! and to download the puffin spotter’s guide and other information that will go live on Saturday, visit puffinsgalore.co.uk.