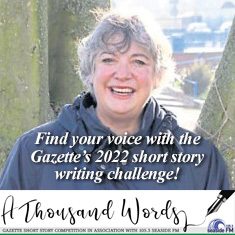 Are you a budding writer with a story to tell? It’s time to let your imagination soar with the Gazette’s 2022 short story competition. Your writing talent could make you a winner!

The Holderness Gazette has once again teamed up with Seaside FM to launch an exciting short story writing competition.

We are on the lookout for budding authors to take up the challenge with an original idea. We plan to publish the winning entry in the Gazette on February 17.

The chosen story will also be recorded to be aired on Seaside FM, where it will be narrated by our competition judge, Andrea Burn, Gazette columnist and Seaside FM presenter.

In previous years we have given you an opening line, but this year we’ve decided to let your imagination decide for you! Stories can be on any theme and in any genre: perhaps you have a burning desire to write fantasy, comedy, romance or perhaps historical fiction or crime, as last year’s winning entry?

Stories must be no longer than 1,000 words, typed and double-spaced and preferably emailed to: [email protected] and mark your subject line: “Gazette Short Story Competition”.

Alternatively, stories can be typed, double-spaced on one side of the paper only and either
handed in or sent to: The Gazette Short Story Competition, 1 Seaside Road, Withernsea HU19 2DL.

Only emailed or typed entries will be accepted. Please add your name, address, email address and daytime phone number and the name of your story on a separate sheet of paper attached to your entry. The title of your story must appear on both emailed and posted entries.

The closing date is 5pm on Thursday, February 10, 2022, with the winner announced on February 17.

Andrea will be looking for original ideas that make her want to turn the page and find out what happens next, with a great opening, characters she believes in and a plot that holds her attention to the end. Even if you have never written before, why not give your imagination free rein and have a go? Well known in Withernsea, Andrea Burn is a Gazette columnist (Well I Declare: Anglo/ American Tales) and a weekday radio presenter on Seaside FM.

Born and raised in America’s Deep South, when she was 10 Andrea’s parents relocated the family to the UK, where she has lived ever since. School and university were followed by marriage to Richard and raising their family of three children, as well as a very rewarding career as an early years teacher, where her love of storytelling and writing were put to good use; drawing on her experience of two different cultures.

Since relocating to Withernsea a decade ago with Richard, Andrea has become involved with local creative groups. She is a storyteller as well as writer of observational comedy, performing her comic monologues locally and in Hull. Andrea is a founding member of Writers of Withernsea and the Hull Storytellers and is a published author of two of her children’s stories from her collection of semi-autobiographical tales based on her early life in America, Little A in Virginia (2016). She is a regular contributor to a 1970s blog, onceuponatimeinthe70s.com, and in March 2020, Andrea was delighted when Yorkshire Life magazine published her feature article on Withernsea.

Andrea enjoys walking her dog on the promenade and keeping her ear to the ground for a good yarn.