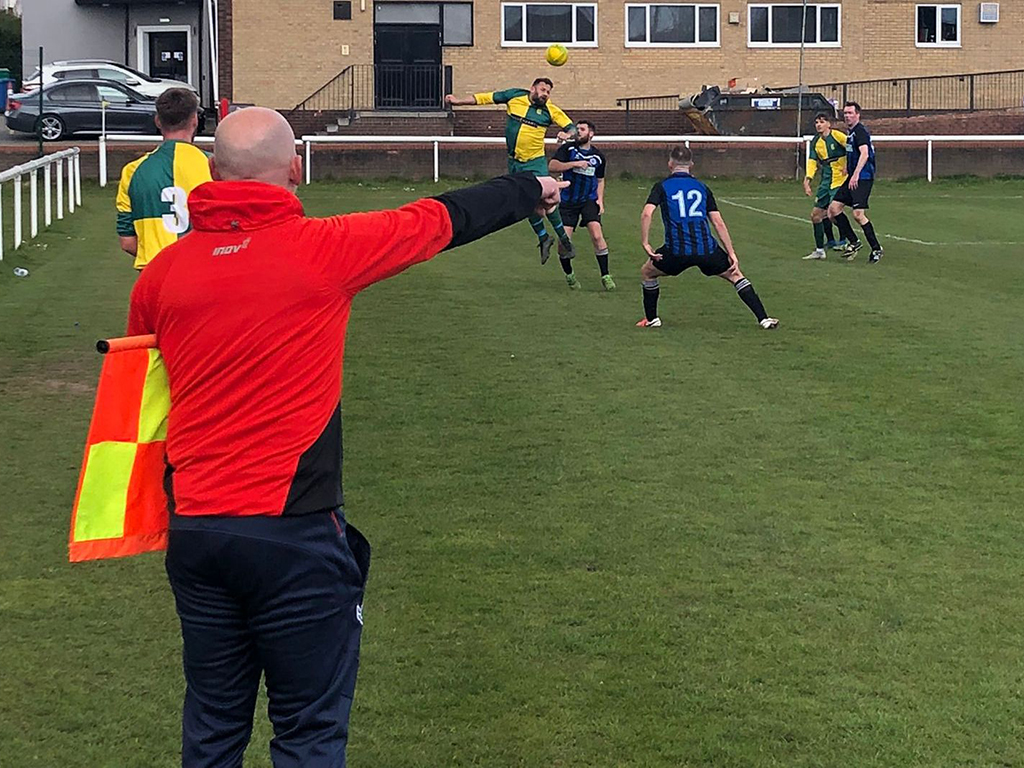 Easington United will be looking to back things up when they host Brandesburton at Low Farm in Humber Premier League Division 1.

Having beaten Blackburn Athletic last weekend, and with fellow strugglers Goole United and Driffield Evening Institute set to meet each other on the same day, a win for Craig Foster’s side at Low Farm will give them another lift in their quest to avoid a wooden spoon finish – and possible relegation.

Foster returns after missing the win at Blackies and will swap places with assistant Craig Smalley, away this weekend.

Along with the technical area, United’s playing squad will also be set to show some changes on Saturday, with Billy Symes absent due to work and both Andy Graham and Darrel Thompson doubtful of their availability.

Dan Warcup is one of last week’s absentees set to return, but both Charlie Holden and Mark Thompson (who both featured at Goole) remain absent.

Prior to last week’s reverse, Brandesburton had been on a decent run of form, with wins over both the top two. They also enjoyed the spoils when hosting Easington in February, enjoying a 3-1 win at Catwick Lane.

Foster felt his side were ‘bullied’ out of their stride in the first half of that game and took 45 minutes to react. He will hope for a much quicker start this time around.

To that end he will be pleased to hear the reports from Blackies, describing how the locals scrapped for every morsel on offer, putting their bodies on the line in pursuit of the win.

Complementing the First Team’s success, there was (hopefully) good news for the Reserves last weekend too. This came courtesy of Gilberdyke ‘home walkover’ awarded them against Leven MC Reserves, after the visitors failed to fulfil the fixture. The upshot of this is that Leven will finish bottom of ER County League Division 2, thus strengthening the Reserves’ hopes of preserving their status therein for 2022/23.

Elsewhere, the Fourths were beaten by AFC Skirlaugh Seniors last weekend in their final Division 7 home game of the season. On Saturday they are scheduled to visit Bridlington Legion although at time of going to print there is some doubt over whether the game will go ahead given the hosts’ recent run of conceding games.

Last Sunday should have seen the Awd Ezzies taking on title favourites Northern Wanderers in Hull Vets League Division 5. Unfortunately, the game was postponed after reports of a CV19 outbreak in the visitors’ camp, something that obviously shouldn’t possibly be linked with their previously unsuccessful attempt to get the game deferred to another date (*inserts thinking emoji*).

Away from the action, a reminder that tickets are now on sale for the 75th Anniversary Dinner in the Circle Restaurant at the MKM Stadium on Saturday, September 24. Guest speaker is former Newcastle, Liverpool and England star Peter Beardsley with tickets priced £40 available from either Daniel Campbell (07794 572250) or Stuart Campbell (07792 770475).