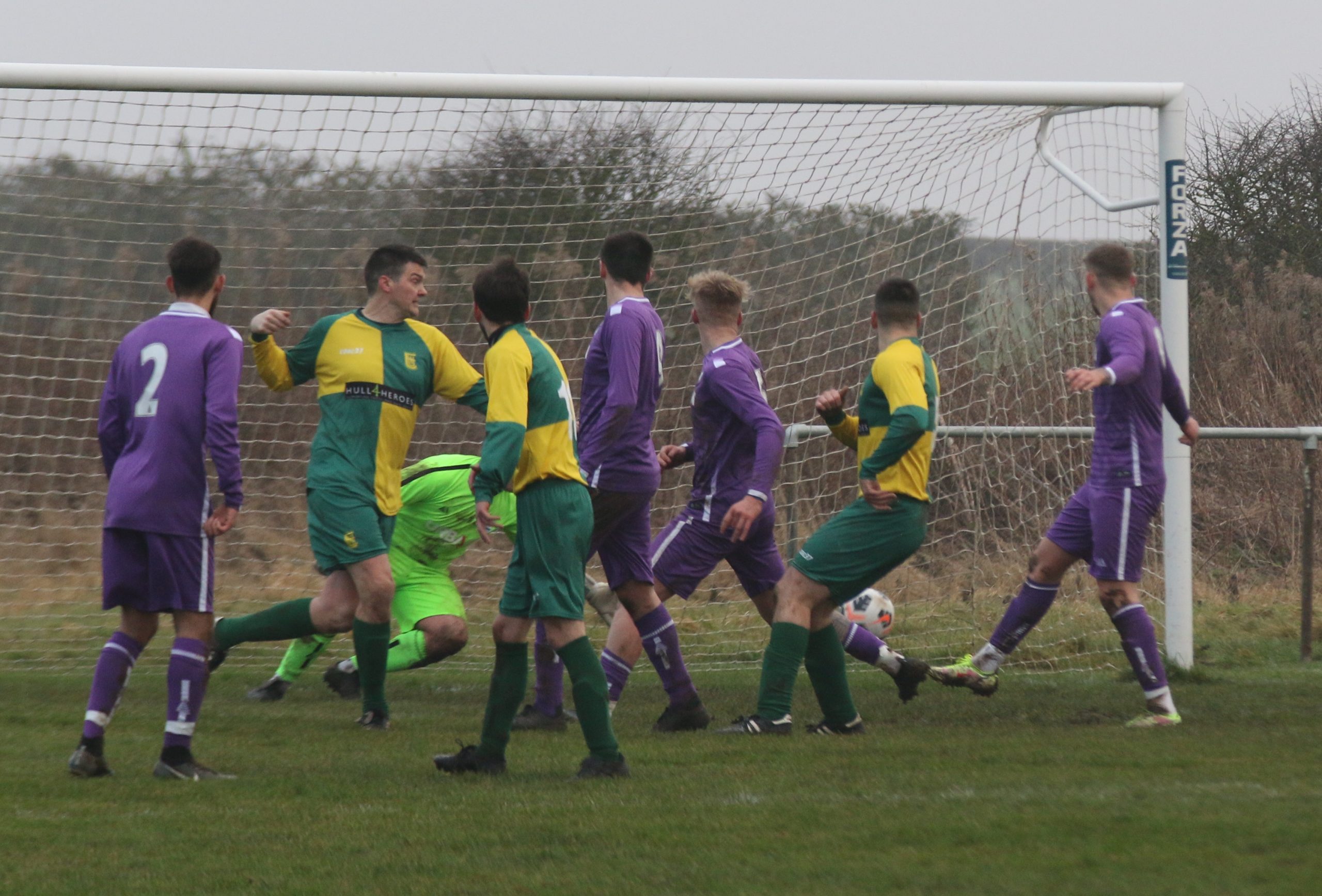 EASINGTON United’s first game of 2022 ended in a narrow home defeat at the hands of titlechasing St Mary’s, yet just how that outcome came about remains a puzzle to many of those present.

For the second time in as many meetings, the Eastenders enjoyed the better of things over the 90 minutes, as well as creating the lion’s share of the chances. Unfortunately, a failure to take them ultimately proved costly, with manager Craig Foster left bemoaning “at least four one-on-ones” that went begging.

In front of him, Danny Blount came in for only his second appearance of the season as partner for Andy Graham and replacement for the suspended Ollie Bewell. Reserves boss Brad Bowden took the left back berth in the absence of Warcup, Smith and Phipps, with Luke Jeffery returning to line up on the right.

In midfield Jack Wright and Kris Fitzpatrick formed the central axis, with Cam Hay on the right and Stiffs’ assistant-boss Karl Fitzpatrick again filling in on the opposite flank. Up top Darrel Thompson brought his experience to bear alongside youngster Tom Tukoroa, while the bench saw a return for Charlie Clark, a first call up of the season at this level for Jacob Cremer-Herrington and a first appearance since pre-season for Paul Morrill.

The visitors also showed several changes from the side that had shared six goals at St Mary’s prior to Christmas. But it was one of their scorers that day, Cody Wilks, who opened the day’s account on 19 minutes; the home defence being caught napping, which allowed Wilks to lift the ball over Whitelock.

Prior to this, the game had already seen a couple of yellow cards – one for each of the two skippers – as both teams carried on the competitive nature of their first game.

Young Tukoroa had enjoyed the first sight of the St Mary’s goal but having cleverly worked some space onto his left foot, he delayed the shot, and the chance was gone.

On 17 minutes, Albie Collier volleyed wide for the visitors before Wilks fired them ahead.

The locals responded well and from a Bowden throw-in, the impressive Jack Wright lofted the ball to the far post where the arriving Jeffery – like Tukoroa – delayed his shot and Wilks got back to block. As half-time approached, Easington began to build up a head of steam and Ben Elliott followed his skipper James Lee into the referee’s notebook on 35 minutes, following a clumsy challenge on Tukoroa some 25 yards out.

The resulting free kick came to nothing on that occasion but when United were awarded another five minutes later, on the apex of the box, Thompson’s strike somehow found its way through a glut of bodies to nestle inside the far post, with at least one defender appearing to get a touch and the loitering Graham claiming one!

Both teams had a chance to claim an advantage at the interval, Mowforth appearing to strike the ball into his own hand when well-placed at one end and Tukoroa this time rushing his shot at the other having shown good strength and awareness to create the chance from Fitzpatrick’s pass.

The visitors were handed the perfect chance to regain the lead from the penalty spot just two minutes into the second half; Whitelock, having made a hash of a crossed ball into the box, fouling an opponent as he was about to pounce. Thankfully for the locals, the keeper amended for his misdemeanour with a fine save to deny Collier.

Easington made the most of their escape and immediately went on the front foot.

From good work by Bowden down the left, Tukoroa – growing into the game with every stride – showed lovely footwork to open the shot but Dougherty smothered well.

On 53 minutes, Wright’s looping header from Thompson’s corner had the back-peddling Dougherty stretching to tip the ball over.

Three minutes later United led; Jeffery latching on to Graham’s free-kick and cutting inside before drilling the ball home for 2-1.

The lead lasted four minutes. A promising Easington attack broke down when Karl Fitzpatrick took the wrong option and St Mary’s countered quickly. Both Bowden and Graham went to ground too easily, allowing Wilks to provide the ball on a plate for the arriving Dan Mowforth to head home.

Back up the other end and Tukoroa rolled his man before firing just wide. It was turning into one of those days for the 16-year-old.

Morrill replaced Hay as Foster re-jigged his midfield and the sub immediately began to produce those little touches of quality the Farm Faithful have become accustomed to.

The locals remained the likelier winners and skipper Fitzpatrick will perhaps rue not getting enough on his free header 12 yards out, after Jeffery’s looping cross hadn’t been dealt with.

Having provided something of a spark on his introduction, Morrill’s next contribution was to inadvertently lead to the decisive goal. Ten minutes from time, the sub was dispossessed in his own half and Wilks punished him with a decisive finish for 2-3. Even now, though, United could and perhaps should have turned things round.

On 82 minutes Thompson stood the ball up to the back stick where Bowden took a touch that proved costly, Dougherty again getting down to save. Then, after Collier had blazed over at the other end after a swift counterattack, both Cremer-Herrington and Tukoroa failed to make the most of excellent opportunities.

For the sub it was a case of perhaps choosing the wrong finish when played through by Wright’s exquisite pass, Dougherty again making the save. Then, right at the death, Blount’s flick allowed Tukoroa to speed past the Saints’ defence but although he managed to lift the ball over Dougherty it drifted wide of the upright and with it went the locals’ hopes.