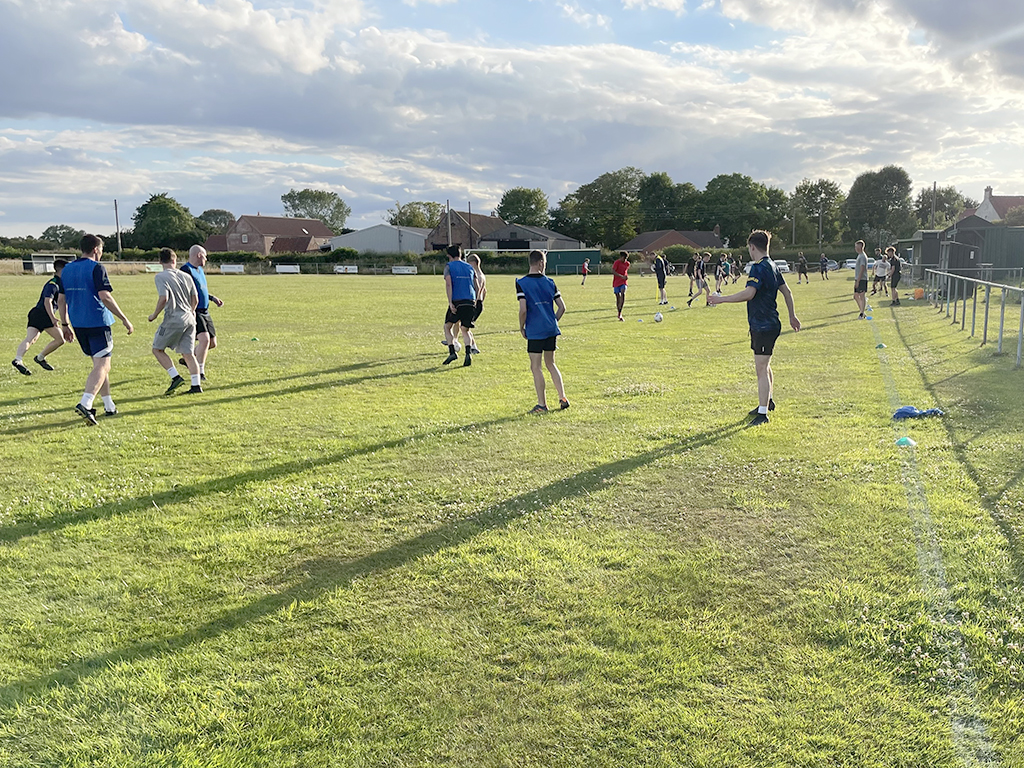 Easington United’s management and players began their preparation for the forthcoming 2022-23 season when the club held its ﬁrst training session of the summer on Tuesday.

Following the two-hour workout, many of those same players retired to the Marquis of Granby for the club’s annual general meeting, details of which will appear on our website and in next week’s Gazette report.

There’s an added signiﬁcance to the forthcoming season inasmuch as it coincides with the Eastenders’ 75th birthday, an event that will be oﬃcially marked in September.

Sadly, lack of any surviving documentation from the original “Easington Football & Cricket Club” means the exact date of formation in 1947 has never been established.

What is known for certain is that all involved at Low Farm will be keen to ensure the anniversary season goes somewhat better than its 2021-22 predecessor!

Stung last term by the lack of commitment of so many, the club will ﬁ eld just three Saturday teams in 2022-23. While the First Team knows the nature of its opponents in Humber Premier League (HPL) Division 1, the Reserves and Academy teams are yet to ﬁnd out their divisional allocation in the East Riding County League.

At the recent HPL AGM, it was revealed that Division 1 will consist of 12 teams this coming season, with two of the newcomers coming from opposite extremities of the Humber region.

National League North side Scarborough Athletic will be represented in the competition by their newly launched Reserves, with the team being based at the Filey Community Sports Club. Meanwhile, from across the Humber, Lincolnshire League outﬁt Appleby Frodingham have entered a Development team into the competition.

Other new entries for 2022-23 are Holme Rovers and Hedon Rangers Reserves (both promoted from the East Riding County League), while Hessle Sporting Club Reserves have been elected through the league’s development plan, the team having emerged from the club’s former Under-16 set-up.

On the ﬂipside, Goole United have opted for “relegation” to the County League. This is due mainly to a lack of suitable venue, given the league’s intention to ensure that certain criteria requirements are met this term (following a relaxation in the rules during the pandemic).

Meanwhile, it has also been confirmed that Brough side Blackburn Athletic have folded.
The final change sees former clubs Driffeld Juniors, Driffeld Evening Institute and Hutton Cranswick SRA all merge to form Great Driffield AFC, a club with ambitious plans for football in the Wolds.

It therefore promises to be another very competitive league but the challenge is one that the locals are keen to embrace, especially having seen a host of youngsters gain their first experience of the competition last season.

The hope now is that those same players can kick on collectively and help Easington to challenge at the other end of the division.

All First Team hopefuls will have three chances to catch the eye before the season starts on Saturday, August 20. An away game at West Yorkshire League side Wetherby Athletic on July 30 is followed by a home game against HPL Premier Division side Hessle Rangers the following Saturday, August 6. Three nights later, the locals conclude their summer sched-ule with a trip to Hornsea Town.

Away from the action, a reminder that the club’s first sponsored event in support of chosen good cause WISHH can now be supported via a dedicated Just Giving page at justgiving.com/crowdfunding/easingtonunitedfc. There are also the traditional paper sponsor forms doing the rounds too.

As previously reported in the Gazette, a 12-strong party of club members aim to climb Mount Snowdon next month to raise funds that will be split between the independent Hull Hospitals charity and pitch improvement work at Easington’s Low Farm home. The group hope to raise £1,000 by their eﬀ orts.

The Mount Snowdon challenge is the first of several fundraising ventures to be staged throughout the season.

Back to matters on the field, there have been a couple of amendments and additions to the remaining list of pre-season fixtures published last month.

The Reserves’ away fixture at Sands United HEY has been pushed back a day to Sunday, August 7, with a noon kick-oﬀ. Meanwhile, the Academy also have a Sunday date, away at Hornsea Town Reserves on 21 August, kick-oﬀ time still to be conﬁrmed.

The Awd Ezzies also have their first pre-season date, with Newland Vets set to visit Low Farm on Sunday, August 14, for the Finchy Memorial Game (2pm).

Any parties keen on supporting Easington United AFC during 2022/23 can email [email protected] to express their interest.