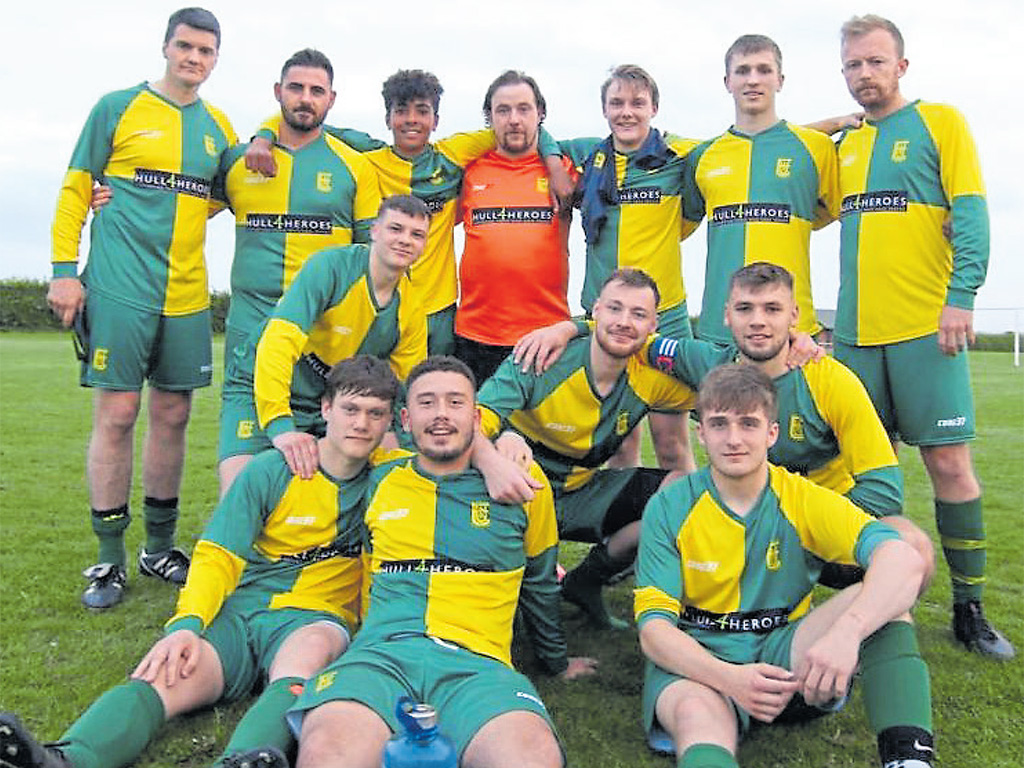 Several aspects of Easington United’s appearance in last Friday’s South Holderness Cup Final encapsulated the club’s 2021/22 season in a nutshell – both the good and the bad.

For while player withdrawals and some awful defensive slips again contributed to yet another defeat, there was also plenty of encouragement to be had too, which is pretty much a summary of the past nine months!

Frustrating as it must have been (again) for management duo Craig Foster and Craig Smalley to see the same negative factors come into play, they will certainly take plenty of heart from the commendable spirit shown by their side, which at times was combined with some lovely football and earned them a well-deserved ovation at the final whistle.

Given the youthful nature of the current squad (which on Friday included six teenagers and only five players aged 25 or over) there is no reason why there can’t be realistic hopes for a much better time of things in the not-too-distant future.

Before then, the players and management will get the chance to come together one more time when the club holds its annual presentation evening. That is scheduled to take place on 11 June in the Marquis of Granby, by which time the members of the Saturday squads will already be enjoying a well-earned rest after a season that has had more than its fair share of setbacks.

Prominent among those was the sad passing of vice-chairman and former manager Mike Wilson in January, one of several ‘Eastenders’ we have said goodbye to over the course of the season.
Mickey Bo’s death further accentuated the sombre mood that appeared almost ever present during a season in which fortunes on the field were never great – at least as far as the Saturday sides were concerned.

All the Easington teams finished in the bottom two of their respective divisions, which perhaps isn’t surprising given the constant struggle for numbers. It’s a situation that has prompted the scrapping of a fourth team in 2022/23 – just a year after the club fielded four teams for the first time in its history.
Hopefully, the reduction in quantity can be accompanied by an improvement in quality, certainly in terms of commitment.

Turning to Sundays and the Vets team’s season is set to come to an end on Wednesday (31 May) when the Awd Ezzies entertain Northern Wanderers in a game that could determine the destination of the Hull & District Veterans League Division 5 title (7pm). Although the locals’ promotion hopes disappeared some time back, it has still been their most successful season since entering the competition.

In contrast to results on the field of play, the club can look back with much satisfaction at their efforts away from the action. In particular, the two-year association with Hull4Heroes yielded a total of £1,500 towards the local veterans’ charity. The final instalment of this will be formally handed over at the aforementioned presentation night.

Club members will now look to forge a similarly successful partnership with the WISHH charity, the Eastenders’ chosen good cause for 2022/23. Our fundraising efforts will be organised in memory of Mike Wilson and, as such, specifically targeted towards Wards 30 and 32 at the Queen’s Centre, Castle Hill Hospital.

Unsurprisingly given the sombre state of affairs, the fact that this is a milestone year for the club has been somewhat lost. That will be rectified over the second half of 2022 with both the club’s 75th anniversary and chairman Doug Clubley’s 60 years’ involvement both set to be marked by the club.

The official 75th Anniversary Sporting Dinner takes place in the Circle Restaurant at the MKM Stadium on Saturday, September 24, with guest speaker being the former Newcastle, Liverpool and England star Peter Beardsley, along with MC/comedian John Gillan.