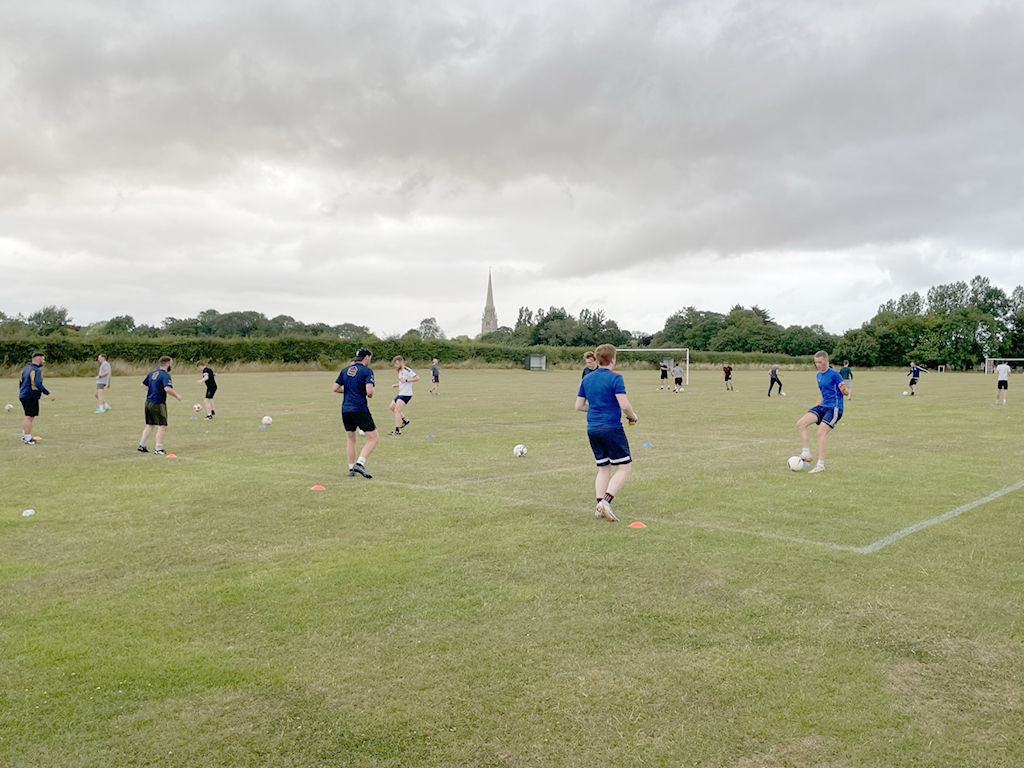 Easington United will take two teams to Wetherby this Saturday as they play the first of several pre-season fixtures ahead of the 2022/23 campaign.

The Eastenders head west hoping that Saturday’s first excursion proves as enjoyable as last year’s similar away day to York League side Wigginton Grasshoppers. Despite defeats in both games played on that occasion, the trip established a bond among the ‘core’ players that was maintained throughout what proved to be a testing league season.

Saturday’s trip to a club that fields teams in the West Yorkshire League will see the locals treated to a post-match barbecue before enjoying a couple of scheduled pub stops on the return journey; hopefully ensuring a decent day out for all.

On the pitch, Craig Smalley will oversee the ‘first team’ squad on Saturday, with Liam Murrey donning the armband after having been appointed skipper for the forthcoming season. He replaces Kris Fitzpatrick, who sadly isn’t set to feature for the club this season.

Also absent from those who could have reasonably expected to be in Saturday’s squad are injured duo Luke Jeffery and Sam McLaughlin, along with Chris Frost, Andy Graham, Steve Jamieson, Billy Symes and Dan Warcup.

Among those included for the Wetherby game are former Reserves manager Brad Bowden and assistant Karl Fitzpatrick, both now looking to stake a claim for a permanent place in the senior squad. Dan Lorimer also returns to the ranks and joins Ollie Bewell, Charlie Clark, Harvey Clarke and Tom Tukoroa in what again looks to be predominantly a young and vibrant first team group.

As a knock-on effect of the usual summer-related availability issues, the nominal ‘reserves’ team that Sam Outing takes charge of for the first time on Saturday will include a sprinkling of players who might well expect to feature more at Academy level once the season gets underway.

Hosts Wetherby have already played several pre-season games. The first team have enjoyed wins over Harlow Hill of the Harrogate League Premier Division and West Yorkshire League rivals Sherburn White Rose. Meanwhile, the Seconds – who ply their wares in the league’s Alliance Division 2 – opened up with a 5-1 win over Division 1 side Boroughbridge Reserves before losing 7-1 at Route One Rovers Reserves last weekend.

Following Saturday’s opener, the Eastenders senior squad will host Humber Premier League Premier Division side Hessle Rangers at Low Farm on August 6 before concluding their schedule away at Hornsea Town on August 16 (a game originally scheduled for August 9 but moved due to the hosts’ Holderness Cup Winners Cup commitments).

Meanwhile, next Wednesday (3rd) an Eastenders Academy side will travel to face CAST United Community side at Pickering Park in their opening pre-season friendly.

Looking further ahead, the Humber Premier League has confirmed that Appleby Frodingham will not now be entering a team into Division 1 for 2022/23.

Training continues as the new league season edges ever close. This week saw the usual Monday night session at Patrington set to be supplemented by another shorter stint tonight (7.15pm). So far, attendances have been very encouraging, especially given the various harvest and holiday commitments.

With just over a fortnight to go before the club’s Mount Snowdon challenge, which aims to raise funds for the club and for our chosen good cause, the WISHH charity for Wards 30 & 32 at Castle Hill Hospital, a reminder that any sponsorship would be very much appreciated. This can be pledged either via the traditional sponsor form route or online at www.justgiving.com/crowdfunding/easington-unitedfc.

Also, a reminder that tickets are currently on sale for the Eastenders’ 75th birthday celebrations, which take place at Hull City AFC’s MKM Stadium on Saturday, 24 September. Priced £40 each, they are available from either Daniel Campbell (07794 572250) or Stuart Campbell (07792 770475). Guest speaker at the Sporting Dinner is former Newcastle, Liverpool and England star Peter Beardsley MBE, supported by MC/comedian John Gillan.

Finally, any business or individual wishing to support the club in any way during the new season can do so by emailing us at [email protected]