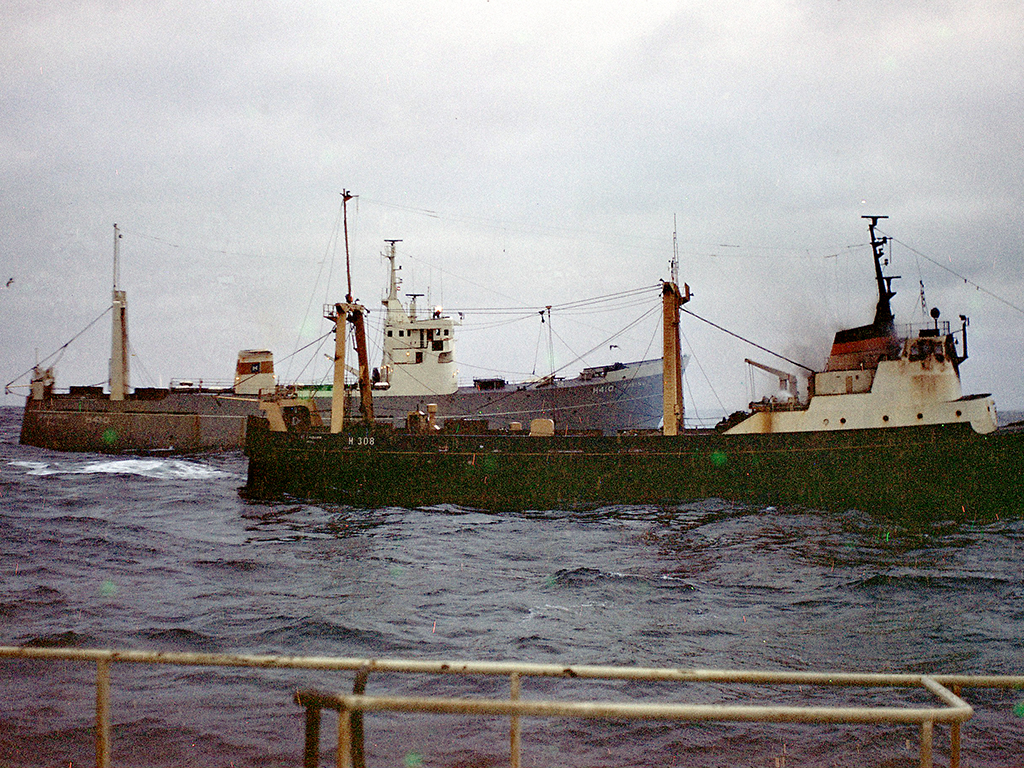 On Christmas Day, 1966, 12 of the 25-strong crew of the ‘supertrawler’ St Finbarr – commanded by courageous Hornsea skipper Tom Sawyer – died in an explosion off Newfoundland. Brian W Lavery tells the remarkable story

St Finbarr’s final trip was plagued by bad luck from the start. She took 14 days battling atrocious weather to get to Newfoundland’s Grand Banks – a trip usually done in half that time.

On her maiden voyage in late 1964, St Finbarr, the most expensive Hull trawler ever at £500,000 (£13 million in today’s money), smashed the national record hauling in 488 tons and 17 hundredweight, and had continued to do so since. The press dubbed her “the perfect trawler”.

The supertrawler project was a family affair from drawing board to launch runway.

Hull Daily Mail shipping correspondent Robert S Wellings noted at the time: “The name of a little-known Irish saint who died more than 1,300 years ago will soon be coming easily to the lips of Hull trawlermen.

“They will use it when they talk about the big, 230ft all-freeze stern trawler which will glide into the Clyde at the yard of Ferguson Brothers (Port Glasgow) Ltd, tomorrow.

“The trawler is for the saintly named fleet of Thomas Hamling and Co Ltd, Hull and at the launching ceremony Miss Alanah Watson Hall, daughter of the company’s chairman and managing director, will name it St Finbarr. Appropriately – but by coincidence – the launch is taking place on the day after St Finbarr’s commemoration day.”

Ironically, it was St Andrew’s Day (the patron of fishermen) when she reached the Newfoundland fishing grounds, ready for another record catch.

Thirteen trips after her maiden voyage, she endured 38 days of foul weather, from Yorkshire’s Spurn Point to fish the storm-lashed grounds of the Grand Banks. Skipper Tommy Sawyer, a hard taskmaster, still managed to fill the fish holds and the crew looked forward to another bumper round of “film star” wages.

He pushed his ship and her crew to the limit until fishing was forced to a halt when the nets were damaged and needed repair. Sawyer told his men to go below and rest before the next haul, apart from those on watch and those working on the nets.

The weather worsened – and by around 4am – as it was Christmas Day, Sawyer sent the ship’s mate around the crew to hand out some beers and whisky.

At 7.30am, Sawyer, who had been working for almost 18 hours, took a panicked call from below decks.
Seconds later the ship’s assistant cook Dave Whitaker appeared on the bridge shouting, “Fire!” Sawyer lifted his radiophone and managed to get a hurried mayday out.

The Hull stern trawler Orsino, commanded by skipper Eddie Wooldridge, confirmed receipt and was on the way from five miles away.

A fraction of a second later, Sawyer was blown out of the wheelhouse window by a fireball explosion. He landed unconscious on the casing below. The melted plastic receiver of his telephone was still burning in his hand.

When he came to, he knew no one below could have survived but he still tried to get back below, only to be driven away by intense heat. He could see a dozen or so panicking men in various stages of undress on the aft decks.

He went towards them and fought to calm the men as he decided his next move. Launching the lifeboat was impossible as the men kept getting electric shocks from it as its davit and frame were live with electricity.

Sawyer decided to get the smaller life rafts launched, one either side. The men were slow and clumsy (a symptom of frostbite) and this, coupled with exhaustion, led to them losing the raft from the starboard side.

It was freezing, there were high winds and turbulent seas, and the remaining life raft was their only hope.
Twelve men managed to get away in that raft – and at 9.30am were cast off to drift over to the Orsino.

Two men – radio operator Tommy Gray and greaser Harry “Curly” Smith – perished when each fell from the rope ladder used to board the rescue ship as she was thrown around in the storm.

The skipper, mate Walter Collier and chief engineer Hughie Williams bravely stayed with the St Finbarr and sheltered exhausted in the net loft.

An hour later another Hull trawler the Sir Fred Parkes fired a line across with a life raft containing warm clothing, but the trio were too weak to pull it aboard.

The Orsino rescue party later got to the St Finbarr, took warm clothing and rescued the three ship’s officers.

At first the rescue party leader, Orsino mate Bryan Lee, feared the three men were dead when he found them unconscious in the net loft, but he managed to revive them with brandy and fresh clothing, having had to cut their old clothes from them.

Fire still spread through the St Finbarr and there was a constant risk of further explosions.

At about four o’clock, the boarding party returned to the blazing ship and fixed a towline. Sawyer and 12 of his crew were now safe aboard the Orsino which soon began to tow the stricken trawler stern-first, the 240 miles towards St John’s, Newfoundland, at a dead slow pace.

Back in Hull, there was fear and confusion. Rumours and exaggerated jungle telegraph tales abounded in the pubs and clubs on Hessle Road in the heart of the fishing community.

On Christmas Day evening at the local Royal National Mission to Deep Sea Fishermen, Rev David MacMillan was dispatched by the owners to tell the families the limited amount they knew; that there had been an explosion and some men may have died.

The Mission man and his volunteers went to prepare families for anything they might hear on radio or TV later and to urge them not to listen to the gossip.

Because Christmas fell on a Sunday, there were no newspapers until December 28. This and the volume of radio traffic compounded the community’s traumatic two days.

In a dispatch from Newfoundland sent on December 27, headlined “Blazing trawler sinks in gale,” Victor Davis of the Daily Express wrote: “In Britain it was the quiet disaster […] not until tonight did details of the Christmas morning disaster in the gale-swept Atlantic leak through.”

It was 2am on Boxing Day when Rev MacMillan got back to his Fishermen’s Mission offices only to be sent out again following a call from the owners.

This time the clergyman had good news – but for only 13 families. It was now known 12 men had perished and the ship was now under tow.

After two days’ battling severe weather the tow line parted and the St Finbarr sank rapidly. They were fewer than 30 miles from shore. Orsino’s skipper Eddie Wooldridge informed the owner Hamlings of Hull, as well as Lloyd’s of London, by radio telegram.

The survivors came home a week or so later. At a press conference in Canada, Skipper Sawyer told how close two men had been to safety before they were lost.

“Two other men died within feet of safety. They fell back into the water as they tried to get aboard the Orsino. Both died from cold. My God, it was a freezing hell out there.”

Skipper Wooldridge, whose supreme seamanship and courage alongside that of his crew saved so many of the men, said, “The hull of the St Finbarr was white hot and the bridge a mass of flames, when we took Skipper Sawyer and the mate.

“The fire swept over the ship in seconds. The rescue of the first part of the crew took three-quarters of an hour, the skipper, mate and chief engineer had stayed aboard a further four hours.

“Conditions were terrible for the rescue. Big seas were running, and water froze as it touched. The men’s legs hung in frozen water (in the raft).”

Skipper Wooldridge also spoke of the dying seconds of the ship after a 48-hour stern-first towing effort failed.

“We towed her for half an hour with her bow under the water, then she went right down and turned to starboard.”

But perhaps the most poignant quote came from St Finbarr’s cook, Harry Prince, who told reporters, “We must be the luckiest 13 men in the world.”

A year later, a Board of Trade inquiry found that a build-up of explosive gas from melting overloaded wire casings caused the blast that destroyed the St Finbarr.

The court also heard that there had been a series of small fires and electrical failures throughout the final voyage and from previous trips too. These had been ignored by the owners in spite of warnings from the crew.

The most dramatic admission of that hearing came when Skipper Sawyer and mate Walter Collier admitted that fire drills had never been carried out, so they could catch more fish. Both men admitted they had faked reports in the log to say the drills had taken place.

But the hearing also put on record its appreciation of the extraordinary courage of Skipper Sawyer and his crew. Skipper Sawyer kept the tradition of being last to leave the stricken vessel having done his very best for the men under his command.

The skipper – whose house, St Alcuin, in Rolston Road, Hornsea, was named after his first command – went on to have a long and exemplary career and was among the most respected of the trawler commanders of the Hull fleet.

Skipper Wooldridge and the men of the Orsino had their courageous rescue work marked at celebrations held by trawler bosses later in the year.

No one can underestimate the courage and seamanship demonstrated by these remarkable men in the most extreme circumstances. And the hearing asked that their admiration be put on record too.

This 1966 Christmas Day catastrophe was overtaken in the public consciousness a little more than a year later when, in the opening weeks of 1968, three Hull trawlers, the St Romanus, Kingston Peridot and Ross Cleveland, sank within three weeks in what became known as the “Dark Winter” – killing 58 men and sparking an uprising led by Lillian Bilocca, aka Big Lil, who led a fishwives’ army who later became known as “The Headscarf Revolutionaries.”

If either events had happened weeks earlier or later there would have been four trawlers gone in twelve months and perhaps we would be talking of a “quadruple disaster” today.

Like all who left their native port never to return – the men of the St Finbarr will – and must – never be forgotten.