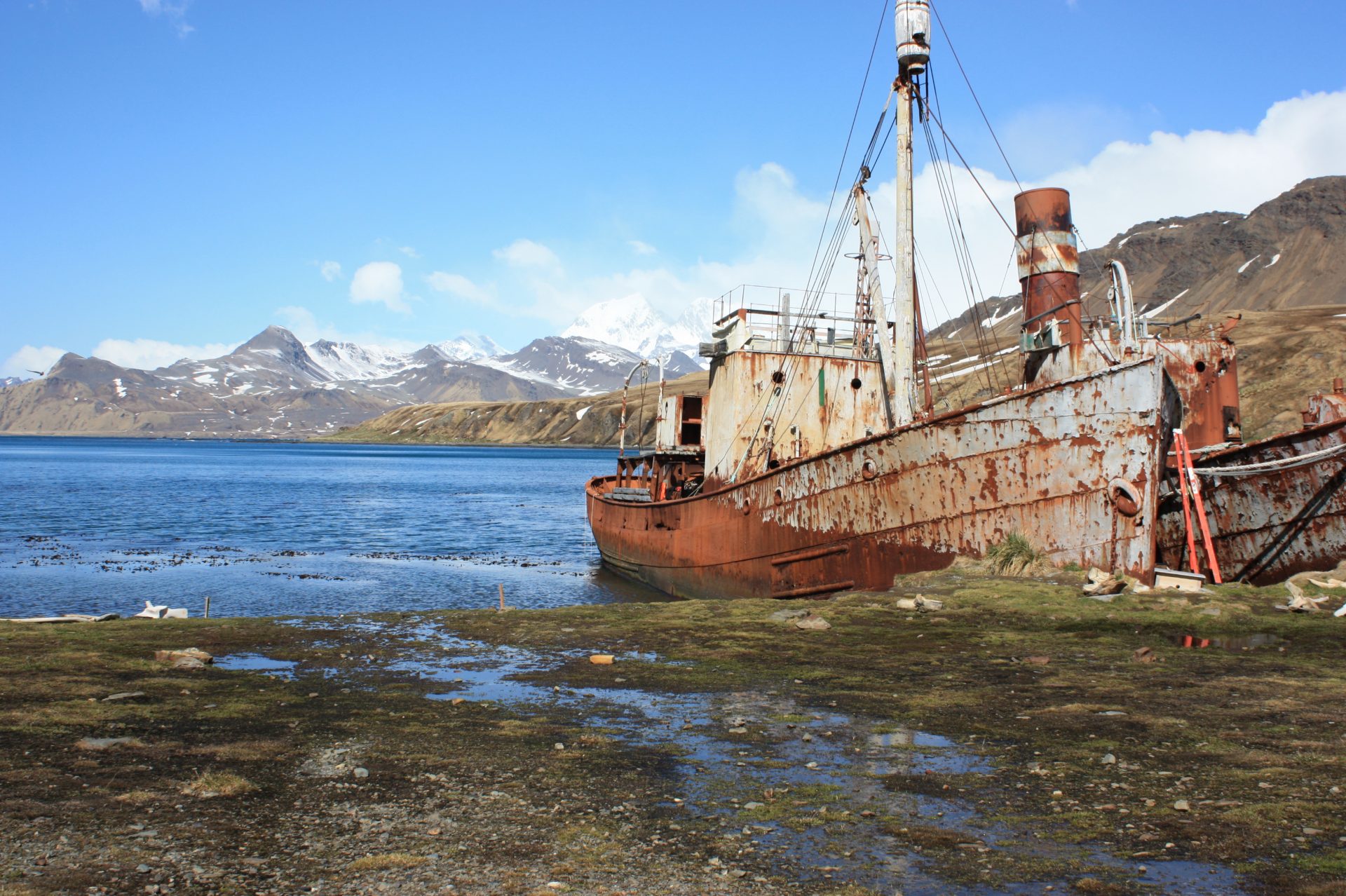 A campaign has been launched to raise funds to bring home the Viola – the world’s oldest viable steam trawler – from her final berth in the South Atlantic. Brian W Lavery tells her incredible story…

VIOLA lies rusting – with her mighty heart stilled – 8,000 miles from home in the sub-Antarctic island of South Georgia, in a place for which the word remote barely suffices. The explorer Ernest Shackleton lies buried a stone’s throw from her final berth in Cumberland Bay, where also lie decaying hulls of two whalers.

Here, the albatrosses and petrels outnumber humanity by thousands to one.

This place came to the notice of the wider world only three times in a century. In 1916 Shackleton sailed in a small open boat with a tiny crew from Elephant Island across atrocious seas.

His party fell upon King Haakon Bay, then the trio crossed glaciers and mountains to a whaling station from where they returned to rescue their marooned men. This real-life Boys’ Own adventure made worldwide headlines.

In 1922, Shackleton died there of a heart attack on his ship Quest while due to return to the Antarctic. Sixty years later Argentine scrap dealers landed nearby and sparked another worldwide story – the Falklands War.

Viola left the Humber in 1914 when she was requisitioned by the Admiralty as a minesweeper. She and her crew sailed to war under the command of Skipper Charles Allum, a London waiter’s son who came north seeking adventure. He was not disappointed. Viola was on the maritime front-line for four years. She steamed thousands of miles across U-boat and mine-infested seas, more than any dreadnought. She first patrolled off the Shetland Islands and later England’s east coast. She was involved in many armed encounters with U-boats. Allum’s leadership and courage resulted in him being mentioned in dispatches. Viola is one of only four vessels around that saw action in the Great War.

If she were a person, Viola’s life would fit in the works of Herman Melville or Jack London – from trawling to minesweeping, submarine hunting, then whaling, taking seals, and latterly hosting expeditions in the South Atlantic. The first was the Kohl-Larsen Expedition of 1928-29 which took the first cine film on South Georgia. Others included the British South Georgia Expedition as well as those for biological work carried out by the Falklands government.

Viola’s life began in 1906. The steam ship was built in Beverley, part of a boxing fleet operated by the Hellyer Steam Fishing Company of Hull. Boxing fleets were an early form of industrial fishing, named after the boxes in which fish were packed. These were transferred in open rowing boats on open seas to fast steam cutters for London to feed the insatiable monster of Billingsgate’s fish market. The railway boom boosted reach – and trawlermen and cutter crews continued to risk their lives so the Lancashire mill girl or the Yorkshire coalminer could have their fish and chips.

Hellyer’s Hull boxing fleet joined three others – the Great Northern, the Red Cross and the Gamecock. The latter was famously fired on in 1904 when the Russian Navy mistook them for Japanese warships. This almost sparked a European war long before 1914. Charles Hellyer’s fleet launched in 1906 and he named most vessels after Shakespearean characters. Like her Twelfth Night namesake, Viola landed on a foreign isle – but with a less happy ending.

In peacetime she was sold to Norwegian owners and renamed Kapduen, and then within a few years converted into a whaler and renamed Dias. Her whaling involved voyages to the African coast. In 1927, she was sold to Compania Argentina de Pesca Sociedad Anonima – known as Pesca.

They operated from Grytviken, South Georgia, and used her for taking elephant seals. Pesca sold out to British firm Albion Star in 1960. By 1964-65 the whaling station closed and the ship, together with the other vessels Petrel and Albatros, was mothballed. Viola/Dias was still there in 1982 when some Argentine scrap metal merchants landed with the aim of cutting up the ships.

They then hoisted their country’s flag and triggered a war, making Viola arguably the only vessel to have “seen action” in the Great War and the Falklands.

Distinguished maritime historian Dr Robb Robinson found that luck played a part in his telling of Viola’s story. In a local radio broadcast, he told of a former Viola skipper whose life was as colourful it was courageous. George William Tharratt – whose birth name was the grandiose-sounding Green Willows Tharratt – had commanded Viola from 1912. In 1919, he was awarded the Distinguished Service Cross for services to minesweeping.

He joined the Royal Navy Reserve in 1914 aged 48 and served on other requisitioned vessels out of Newhaven. George was a bigamist and a philanderer, and not even his name was true. In 1893 he bigamously married Elizabeth Ellis, a widow with six sons. One died in infancy, another drowned near Hull’s Monument Bridge dock and her other four boys followed their stepfather’s footsteps – only for all to drown at war.

Just weeks before getting his medal, George was cited as correspondent in a divorce case by Frank Bailey, a Petty Officer. George had been living with Bailey’s wife and she had a son by him. Yet the scandal was seemingly overlooked. In the 1920s George returned to Hull. He died in 1928 and was buried in a pauper’s grave.

Listening to that broadcast in 2014 was George’s then 97-year-old son, Eric. Later the historian met Eric, who told Robb more about his father – but not before the old chap learned some things too.
Robb said: “I never imagined that I would ever have to tell a 97-year-old man that his mum and dad were not ever married. He was fine with the news and pleased that his father’s life as a skipper was to be recognised and that he was to be remembered as more than just a pauper.”

Eric told Robb how his mother had told her five children that one of them would have to go to Newland Homes, a local orphanage, because she could not afford to keep them. She selected the youngest, two-year-old Violet, but Eric insisted he went because he was nearly 12 and could leave after two years and earn an income to support the family as the new man of the house. At 14, Eric got farm work and four years later joined Smith & Nephew where he stayed for 46 years until retirement.

Eric said he knew little of his father because he was at sea so often and for so long, but on occasions he had joined him on his ships – once on a fishing trip and again on ship sent to Ostend to collect coal during the 1926 General Strike.

Robb’s passion for Viola’s story joined forces with a businessman’s nous and a politician’s persuasive powers to spark a mission to save the little ship with the big history. The Viola Trust has spent tens of thousands of pounds preparing for the great task ahead. Surveys paid for by them show that Viola is in great shape for her age and can be moved home – but at an estimated cost of £1 million. It will be necessary have to put her into a giant frame and put on to a heavy lifting ship for the voyage back. Her steam engines are still intact.

But a further £2 million will be needed to restore her and make her into a museum. It is hoped there will funds from the Heritage Lottery Fund, given its current £27.4 million investment across six years in Hull to mark its revival as Yorkshire’s Maritime City.

First, there is a Catch-22 to overcome. Robb, who literally wrote the book on the subject, along with Shackleton scholar Ian Hart, said: “In order for Viola to qualify for aid from the Lottery people she would have to be on the Historic Ships register.

“To do that she would have to be in British waters, which surprisingly does not include where she is presently.”

Robb has a reputation as a passionate advocate for Viola and has done lectures about her nationally and internationally. At one he so impressed publisher Richard Wynne that he was offered a book deal in 2014 for Viola – The Life and Times of a Hull Trawler. While promoting that book, Robb’s eloquence paid off again.

Maritime salvage and towage expert Paul Escreet said: “I saw in the local paper there was a talk by Robb about his campaign to bring the Viola home.

“To be honest I went along to see if there was a commercial opportunity, but Robb is such a persuasive speaker that I ended up offering to help.”

At a later lecture in Leith, Robb’s persuasion worked again – this time with the then Liberal Democrat MP, Sir Menzies Campbell.

Paul, who owns Hessle-based tug owner and operator SMS Towage, recounted how Sir Menzies told Robb that he was involved with funding connected with First World War commemorations. He invited Robb to make a presentation at the House of Commons.

Alan Johnson said: “Since the government of South Georgia and South Sandwich Islands gave us permission in 2017 to bring the Viola home, we’ve been focused on the vital first-stage funding. I am confident we will get the remainder later.

“Hull City Council has been successful in securing a lottery grant for its big maritime heritage project. Viola can be its jewel in the crown and occupy one of the three berths being prepared by the project.

“One is for the last sidewinder-turned-museum ship Arctic Corsair, another for the refurbished Spurn Lightship (on the marina) and the third berth is for Viola’s. There’s a great will to raise the funds and a lot has been achieved.

“Lots of folk from businesspeople to ordinary members of the public have come forward.”

Paul Escreet added: “I’ve had one businessman tell me that if we get her home he will give us £10,000 a year for 10 years. And recently I received a cheque for £1,000 from a woman whose holiday was cancelled due to Covid, so she decided to support us.”

Getting her home will not only boost tourism and save an important piece of our maritime history, but also provide jobs and training. The trust and Humberside Engineering Training Association (Heta) plan to have young people to develop their skills with her restoration.

Alan Johnson went on: “We have world-renowned salvage and towage experts right here in my former constituency in the heart of the old fishing community and many dedicated people giving their expertise and support. But we need to land that one big fish to get us on our way home. So, if there are any maritime philanthropists out there, please come forward.”

Maybe the final word on bringing Viola home should be from Eric Tharratt, the 104-year-old son of her ex-commander.

He said: “She is a big part of our history and her coming home will also show the world that my father was more than just a man in a pauper’s grave.”

Brian W Lavery is a Scottish writer, journalist, broadcaster and academic living in Hull. He is author of The Headscarf Revolutionaries and The Luckiest Thirteen (barbicanpress.com), which tell of the 1968 Triple Trawler Disaster and the 1966 Christmas Day tragedy of the Hull supertrawler St Finbarr, respectively