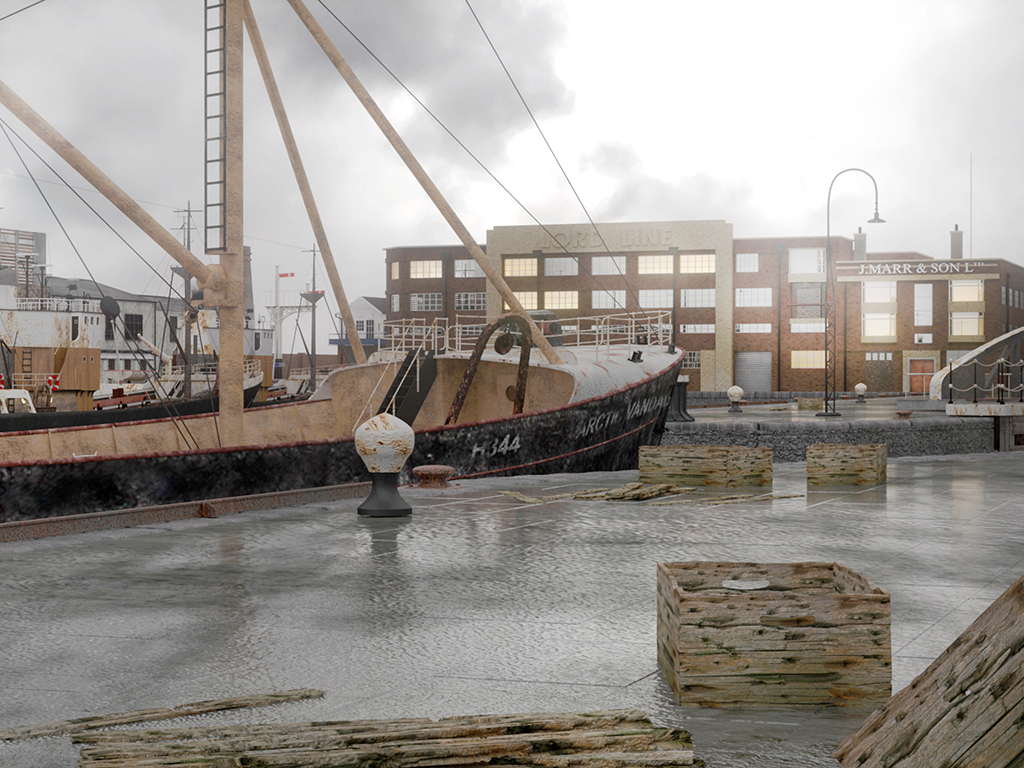 Brian W Lavery meets accidental movie mogul Andrew Fenton, whose new Brit ﬂick has been hailed as the ‘Fishermen’s Full Monty’ and is set to make stars of ﬁve ex-ﬁshermen – including a retired skipper from Hornsea

Roles in a new ﬁlm once meant for Sir David Jason and Bernard Cribbins and others have been netted by ﬁve retired ex-trawlermen from Holderness and Hull.

The story of how the man behind it all found him-self in the movie business would challenge the keenest Hollywood screenwriter.

It all started for businessman and trawlerman’s son Andrew Fenton (pictured) when he decided to build a memorial for the ﬁshing community into which he was born.

There followed a series of calamities that tested him to the limit – but ended with him being director, writer, producer (and some-time set designer) of The Last Trip – the ﬁlm that he says will do for Hull trawlermen what The Full Monty did for Sheffield’s steelworkers.

All he did was invest £2.5 million in a studio, learn how to direct, write a script, get a cast, hire a ﬁlm crew – and recreate Hull’s derelict 1960s docklands. Simple!

“It was all quite a steep learning curve,” says Andrew with typical Yorkshire understatement.

Three years after setting up Northern Films, movie novice Andrew had a full-length feature ﬁlm, promise of national distribution from a cinema chain – and a Hull premiere scheduled for January 2021 –a miracle worthy of Hollywood.

Then Covid stopped it all – but Andrew was undaunted. He put ﬁlm clips on his company’s website and Facebook page and things took off.

“We had tens of thousands of hits and hundreds of great comments from all over the world overnight. It really caught people’s imagination. There is a massive demand out there for The Last Trip.”

The title comes from a huge audio/visual memorial of the same name that Andrew designed for Hull’s Hessle Road fishing community four years ago.

It was while making The Last Trip Memorial that the ﬁlm idea began.

Families recorded stories for the multimedia monument as tributes. It stands 3.4 metres high and is four metres in diameter. Stories are broadcast through a system made by Andrew’s ﬁrm InterTechMedia.

People can listen to the stories played from the steel monument and read inscriptions on miniature ship’s bows that protrude from it.

Each bow is dedicated to an individual ﬁsherman. When not broadcasting stories, The Last Trip Monument plays sea sounds – foghorns, waves crashing and the like.

Andrew said: “Every family has a story to tell, including my own. My dad was on trawlers, but it was only recently I got to know him, and he shared more of his stories.

“All those families came forward and it inspired me. If there had been no memorial there would be no ﬁlm.

“I wanted the ﬁlm to pay tribute, but not to be all doom and gloom.

“I wanted to it be like The Full Monty was for the steelworkers or Brassed Off was for the miners.
“It’s a comedy drama about a group of old pals who decide to steal a trawler and make a final voyage to carry out some final favours for old shipmates’ families.”

The men all belong to the Hull Bullnose Heritage Group (HBHG) – a trawler history society.

There were also roles for Andrew’s late father Stan, a former ship’s cook, and local British Fishermen’s Association chairman Ron Bateman, as well as a host of Hessle Roaders in supporting roles.

The famous-five-ﬁshermen friends with a combined age of more than 400 took to acting like, well… trawlermen to water! But they found themselves replacing some of the biggest names in showbiz by chance.

For it was another ﬁlmmaker who made Andrew realise the talent he’d found. That advice led to him binning Sir David and company in favour of the old shipmates.

Andrew said: “I had written a script and I got the guys from Hull Bullnose Heritage Group to help me make a showreel. At that point I intended to try to get a ﬁlm company to produce my script. That was in 2017 – the year Hull got UK City of Culture status.

“So, we had some folk from the city of culture team visit us. They were shown the showreel and we did a presentation. We wanted their backing and advice – and maybe some help – to make a ﬁlm. They made all the right noises, said it was a great idea – and we never heard from them again!”

Andrew then sent his script around some actors and their agents.

“We had interest from Sir David Jason, whose dad used to come to Hull a lot on business. He was a ﬁsh merchant. We also got in touch with Bernard Cribbins and Brian Murphy to join Sir David in the main roles. We even had Sally Lindsay lined up to play the barmaid.”

That was before BBC documentary-maker Steve Humphries changed Andrew’s and his new cast’s lives.

“Steve was in Hull making the 2018 BBC documentary film Hull’s Headscarf Heroes about the 1968 Triple Trawler Disaster and he visited my office to borrow some props and photos from an archive I keep.

“I showed him the showreel that we had made using the two Rays, my dad, Mason and Ron. They range in age from 75 to 86. Steve told me, ‘If I was making this ﬁlm – I’d use them – they’re naturals. And they know all about the subject matter!’”

The documentary maker’s throwaway line led to years of hard work for Andrew and his team at InterTechMedia. The company, which designs and manufactures showrooms for motorcycle dealers worldwide, had experience of making video ads and CGI (computer-generated graphics) to show customers what design projects would look like.

Then came another blow halfway through making the ﬁlm with the spectre of Brexit.

Andrew said: “A lot of our European clients started to look elsewhere as Brexit threatened to bring in tariffs and new red tape.

“Our business dropped off a cliff. So, we invested in the pipe dream of making the ﬁlm. It was all or nothing.”

It also became a source of work for those remaining at his media, design and prop-making ﬁrm. An-drew invested £2.5 million of his own money to set up a studio.

Aptly, Northern Films Studio is opposite the river Humber, near the derelict St Andrew’s Fish Docks.

“We learned on the go,” said Andrew. “I was determined that we would use local camera-people, technicians, etc. We also hired local professional actors in smaller roles – and paid them!

“We got kids from the primary school at Swanland village, near Hull, to play the main actors as children.”

Andrew also managed to rope in some local celebrities for cameos.

The docklands where the ﬂashback scenes are set no longer exist – and the museum ship Arctic Corsair was moved into dry dock for refurbishment as part of a history project. It was another challenge for Andrew who got his CGI experts to recreate not only the ship, but also the 1960s docklands.

The storyline is about old shipmates, angry at the modern state of the ﬁsh dock and they decide to steal an old trawler as a publicity stunt, and end up taking the Arctic Corsair, which has been one of the city’s attractions for years.

Andrew said: “They plan to pay their last respects to men they once knew and to bring closure for families who lost loved ones.

“It’s 10 years until the day arrives and their journey begins. They don’t realise the impact of their antics and they soon discover that they’re ‘gonna need a bigger boat’.

“They gang search the UK for a trawler to ‘borrow’ but end up stealing Hull’s Arctic Corsair.

“I am not going to give any more away – but it highlights what they get up to at sea and woven into it are the tales from the memorial.”

It was ﬁlmed in Hull, Liverpool, Grimsby, Fleetwood and across Yorkshire.

Northern Films could have put the movie on a streaming service after Covid kiboshed it – but stuck with Odeon, which showed faith in Andrew’s “pipe-dream”.

It is also a tribute to Andrew’s father Stan, who died last year.

Andrew said: “The ﬁlm will be premiered at the Odeon Luxe Hull. I don’t know precisely when – but it will. We think it will be between September and November this year.

“We have added 22 music tracks and the legalities of that are another delay.

“But the Odeon folk say they will keep the ﬁlm on as long as people go and see it.

“If that’s a success, it will be in the rest of their cinema network.

“Covid threw things out a bit, but I am conﬁdent.” And Andrew is deﬁnitely the sort of chap who in-spires conﬁdence.

In spite of Covid, Brexit, rejection by the city of culture folk, removal of the ﬁlm’s central prop, becoming a ﬁlm director, writer and producer overnight – and a legal delay over music rights – he’s still not beaten.

The Last Trip WILL be at a cinema near you.