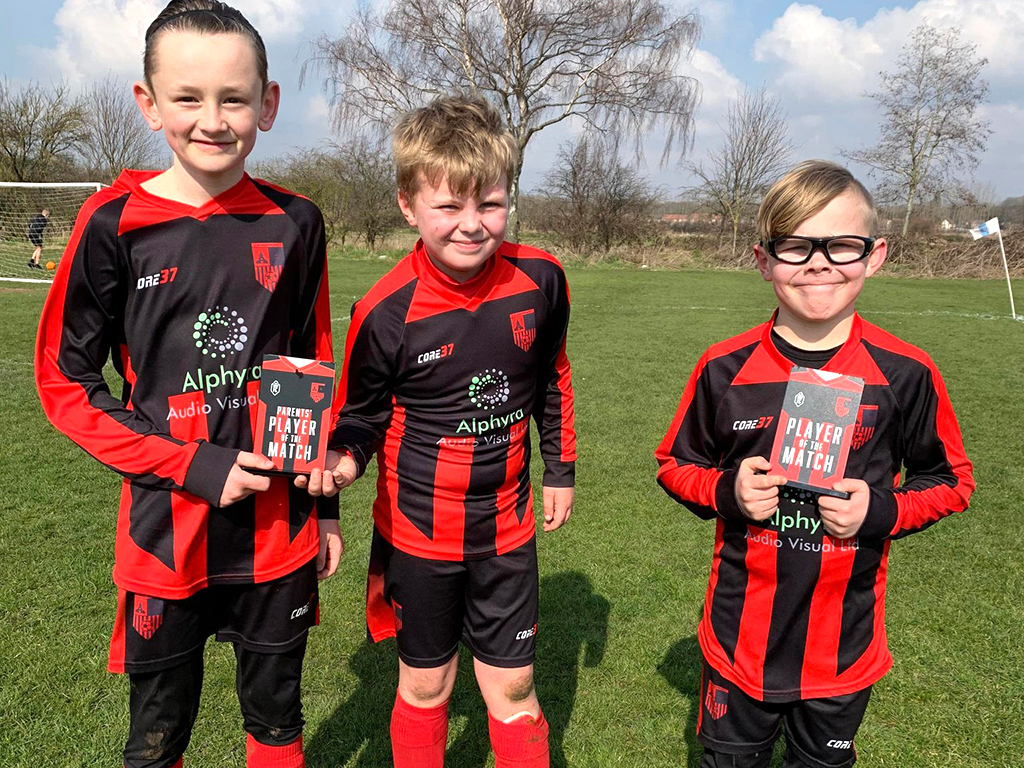 Having yet to grace the turf of Welwick Road this year, it was Patrington again that found themselves on the road for the third time this phase. This week, it was a trip to west Hull outfit Hessle Rangers FC, a team we met in phase one.

In Match 1, Turnbull was to start in goal with a familiar back three consisting of Tyler, Bob and Mason with Jack S and Harvey in midfi eld and with Priest up top. Zack, Oliver and Jack L started on the bench. After last week’s early conceded goal, we wanted to get on the front foot early doors. History nearly repeated itself but Will T in the away goal produced a fine save to prevent Hessle opening the scoring.

Patrington soon got into their stride, With Harvey Glass blazing wide on four minutes, and some excellent link up play between Mason, Archie and Jack S had the home side pinned back. With Bobby and Tyler solid at the back, Patrington made a good start.

A promising break by Jack S on seven mins was abruptly brought to an end, when the home number 13 chopped down the Patrington winger in the box. Much to the disappointment of the defender, the referee pointed to the spot. Perfectly dispatched by Priest, the travelling red and blacks were one up.

Into the second half, Zack Mc, Oliver and Jack L were introduced with Archie, Jack S and Tyler giving way for a well-earned rest. With Oliver and Jack L partnering in midfield, Patrington went in search for another goal. Some excellent footwork from Jack L in the midfield was stretching the Hessle defence, while the constant running and battling from Zack was proving to be too much for the Hessle players to deal with.

Towards the end of the game, some good pressure from the home side saw a good period of possession, but the strength of the away defence somehow kept them out, as chance after chance rained down on the visitors’ goal. A superb spirited performance kept them out, as the visitors held on. Match 2 saw the return of Jack S, Archie and Harvey.

It was Hessle who came out of the blocks first, and after a good spell, finally the Patrington defence was unlocked. A back pass to the away stopper was miskicked, gifting the Hessle number nine with an empty net. Despite the heroics of the Patrington number 1 clawing the ball back, it had crossed the line as Hessle took the lead.

Head in his hands, his teammates rallied around and offered their support, which was great to see. Half-time came, and the home side were one to the good. Into the second half, it was Patrington who piled on the pressure.

Zack was managing to cover every blade of grass, and took an unfortunate ball in the face, but to his credit, didn’t even flinch as the game was stopped. A warrior!

A superb move which started with Jack S at the back found Mason, who twisted and turned to put in Archie. His superb ball found Jack L lurking in the box, and he tapped in the equaliser.

It was all Patrington now, and they were playing some excellent football. Bobby, Tyler and Mason were comfortable at the back, and with Zack, Archie and both Jacks playing good attacking football, the Reds were on the hunt for a second. With more pressure from Patrington, it wasn’t long when some great individual skill from Archie found an opportunity to slot past the home keeper.

Patrington were now on the front foot and looked to see the game out, and when Jack S’s corner rebounded to himself on the edge of the box, a cool low drive beat the keeper and that should have wrapped things up. However, with four minutes remaining, William T was at it again with another heartstopping piece of goal keeping. A picked-up ball that was previously dropped by the skipper was spotted by the referee, who awarded a free kick inside the area. He made a good save from the initial strike but couldn’t keep out the rebound.

It was a very tense final few moments, and with Turnbull’s watch ticking over the 17-minute mark, the referee finally blew up for full time.

A superb team effort from everyone.