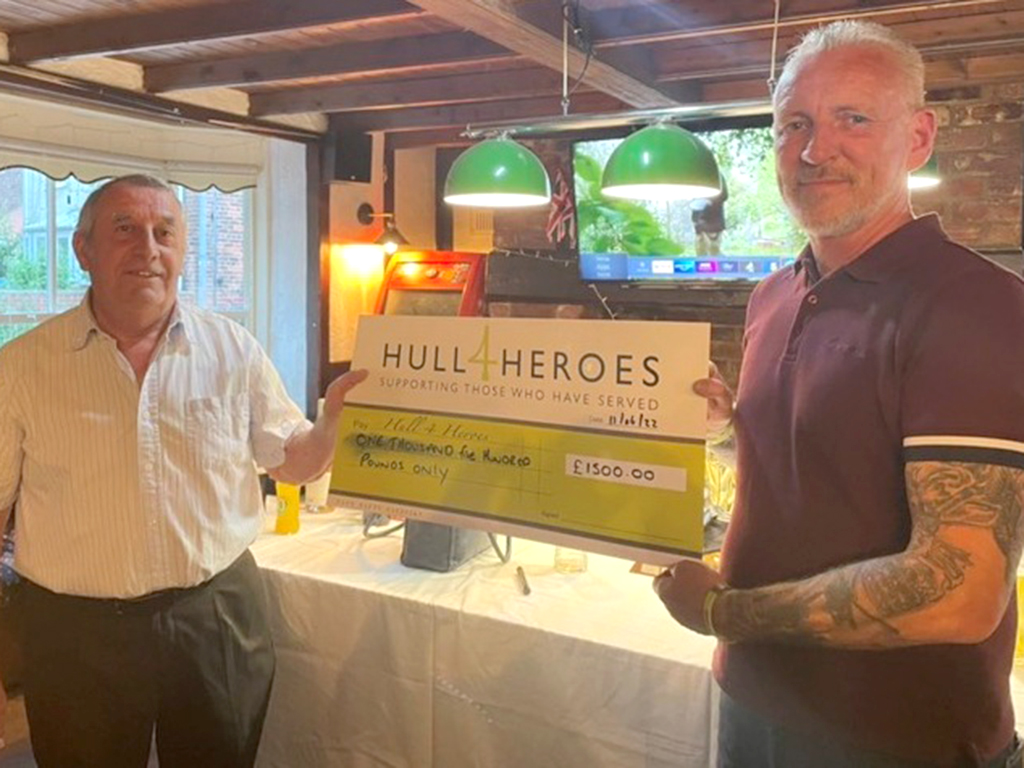 Easington United’s members and friends came together on Saturday, June 11, for the club’s annual presentation evening, held in the Marquis of Granby pub.

Despite the lack of on-the-field success in 2021-22, the event proved hugely enjoyable (if not a little, er, ‘unstructured’ at times) with awards spread across the board.

Prior to the football presentations, we were delighted to welcome Paul Matson and Helen Skinner from Hull4Heroes, who accepted the final handover cheque for the proceeds of the Eastenders’ fundraising efforts over past two seasons.

Paul expressed heartfelt thanks for our efforts before explaining to those present just how such funds are spent (in addition to the Veterans Village project, which the club had already supported). He outlined the difficulties caused by the pandemic and how this – in his opinion – had made Easington United’s fundraising efforts even more outstanding.

Hull4Heroes later described the Eastenders as “bloody amazing” on their social media, while for our part, we are honoured to have been an official supporter of such a worthwhile local charity as well as being proud of our efforts on their behalf during such a difficult time.

A “difficult time” summed up much of my review of the season, which kicked off the football awards. After a moment’s pause to remember those we have lost this season, the club’s various struggles on the pitch were recounted but, thankfully, in a way that brought laughter, cheers and several outbreaks of “community singing” from those in attendance!

The Saturday awards then followed, with the First Team trophies being split three ways. The ‘Man of the Match’ award was retained by Dan Warcup, while Liam Murrey edged a very competitive Players Player vote, seeing off strong challenges from the aforementioned Warcup, Jack Wright, Luke Jeffery and Ollie Bewell. The Manager’s Player award was a poignant one, with the recipient becoming the first to receive the new Mike Wilson Memorial Cup. Fittingly, it was a player who actually made his debut under the great Mickey Bo and was a stalwart of his side for a number of years; Andy Graham reaping the reward for what assistant-manager Craig Smalley described as “a season in which he has been as consistent as I can ever remember him being during my time with the club”. Not a bad way for the 42-year-old to cap off a campaign – his 26th for the club – in which he took his Easington career appearance tally to 691.

The Reserves’ big winner was Jacob Cremer-Herrington who won both the Players Player and ‘Man of the Match’ awards, while youngster Charlie Clark was named Manager’s Player.

The Third and Fourth team awards were combined (in the same way as the team had eventually been over the second half of the campaign) and here too there was a double winner; Sam Smith picking up the same double at this level as Jacob Cremer-Herrington had at Reserves. The Manager’s Player awards were split by team, with Connor Gallagher collecting the Third team trophy and Zach Stephenson the winner at Fourths level.

Chris Frost presented the Dave Frost Memorial Trophy for Young Player of the Season to Ollie Bewell’s, whose excellent first season in open-age football yielded a deserved reward. Both this award and the Doug Clubley Trophy for Most Promising Young Player were keenly contested. Harvey Clarke collected the latter following his excellent progress since joining the club on his 16th birthday. However, the sheer number of prospective candidates for both young player awards hopefully points to a much brighter future for the club going forward.

Lastly for the Saturday awards was Clubman of the Year. Again there were numerous nominations with many players having shown outstanding commitment in a season that wasn’t blessed with much reward on the pitch.

Among those nominated were Jack Wright, Brad Bowden, Alfie Keyworth, Liam Murrey, Charlie Clark, Shawn Pizer and Tom Tukoroa. However, the winner – and a popular one at that – was John Harrison who basically represented everything that is good about the grassroots footballer of today in his willingness to go wherever he was asked, never complained and generally played with a smile on his face – which wasn’t often an easy task at Easington in 2021/22.

Awd Ezzies’ co-manager Daniel Campbell presented the review of the Vets’ season, reflecting on the team’s best season for some years. In the individual awards, Neil Rutter bagged a couple, namely the ‘Man of the Match’ trophy and a share of the Managers’ Player award (with Matty Findley). There was also a tie for Players’ Player between Andy Bentley and Darren Thompson, the latter also becoming the first Awd Ezzie to pick-up the club’s top scorer trophy for the season, courtesy of his 26 goals.

The final trophy of the night was a new one, the Mickey Bo Memorial ‘Moment of the Year’ award, which was voted on by the players and could be in honour of absolutely anything that had happened across the season just passed.

In the event, four moments were short-listed, with the winner being the orchestrating of the ‘Ezzie Ultras’ during the final league game of the season, for which credit went to Foxx Blyth and Sam Smith.

Flowers were presented to Judy Sugden and Christine Ward, in recognition of the immense work they continue to perform at committee level and, in the night’s final act, a bouquet was also presented to Jo at the Granby, in appreciation of the pub’s support over the past season.

During the evening, tributes were not only paid to the much-missed Mickey Bo but also to chairman Doug Clubley, who this year celebrates 60 years’ involvement with the club and has continued to be a driving force despite the keenly felt loss of his right-hand man.

With people like this at the helm, the hope is that Easington United AFC will continue to host nights like this for many more years to come.

MORE PICTURES IN THIS WEEK’S PAPER!