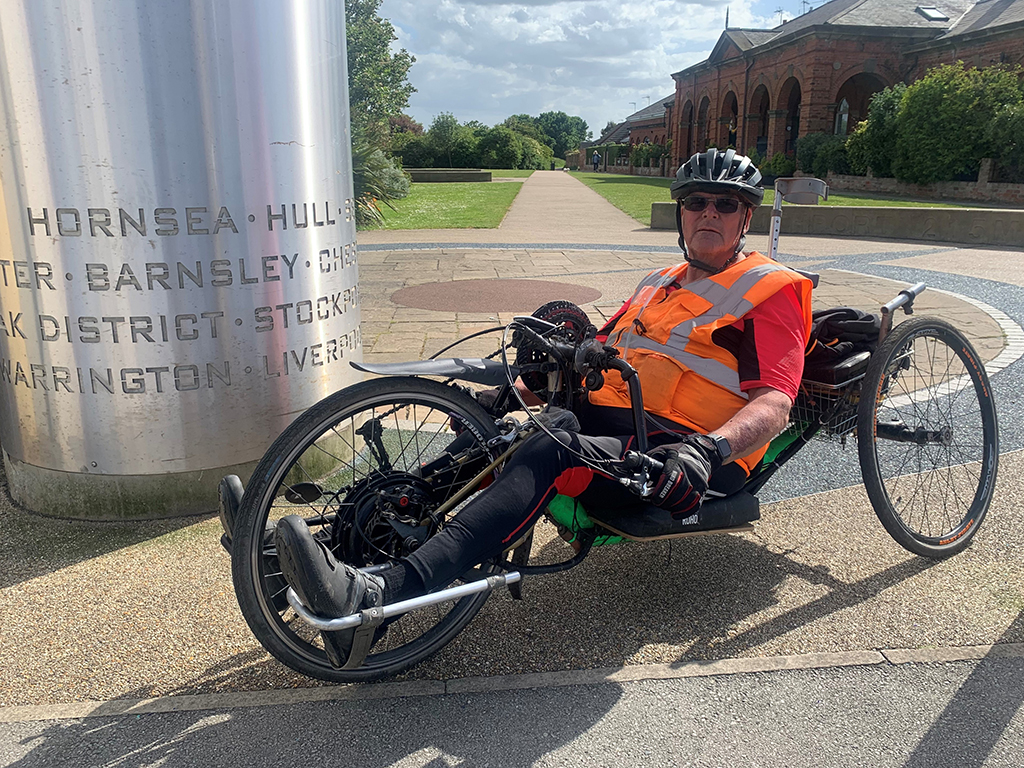 A disabled Armed Forces veteran is thought to have become the first person to travel coast to coast along the Transpennine Trail from Southport to Hornsea using a hand cycle.

Andrew Moult, 63, of Walsall, set himself the challenge of cycling the Transpennine trail to raise money for Shine, a charity that helps people with spina bifida and hydrocephalus.

The charity is important to Andrew, having seen the effects of it first-hand as his sister Nita suffers from the disease, and as part of his challenge he hopes to raise £2,500.

He said: “Spina bifida is a disabling disease, yet there is no cure for it. They are born with it and it’s operation after operation. Their families suffer as well because you are bound to each other. But my sister Nita is a wonderful person – she does lots of things for other people and puts herself out there. I wanted to do this for her.

“I have always been a person who likes to help others. When my friend passed away with motor neurone disease, I had to do something, so I did a 500-mile race. When I saw my sister, who lives in Wales, was struggling, I told her I was going to do the Transpennine Trail coast to coast.”

Andrew, who uses a wheelchair and suffers from a number of health conditions, turned to his specially adapted bicycle to help him in his challenge. It is a low-bearing bike that allows the rider to rest their legs and back while using their arms to pedal.

Over four days, Andrew cycled 243 miles, supported by his friend and Walsall Bike Project organiser Steve Price. With the help of Steve, Andrew was able to scale the Pennines’ steepest hills. Walsall councillor Richard Worrall also offered vital support, driving Andrew to each starting destination and meeting them at each end point.

On Friday, June 10, both Andrew and Steve reached the end of the trail at the Transpennine statue on Hornsea Promenade. Completing the challenge meant he had become the first person to complete the trail on a hand cycle, he said.

He said: “I’m very emotional and happy. I could not have done it without Steve. I’m not exhausted – I am tired, though. I am now going to go home to my wife and grandson, and I will sit down and relax, and think about what I am going to do next.”