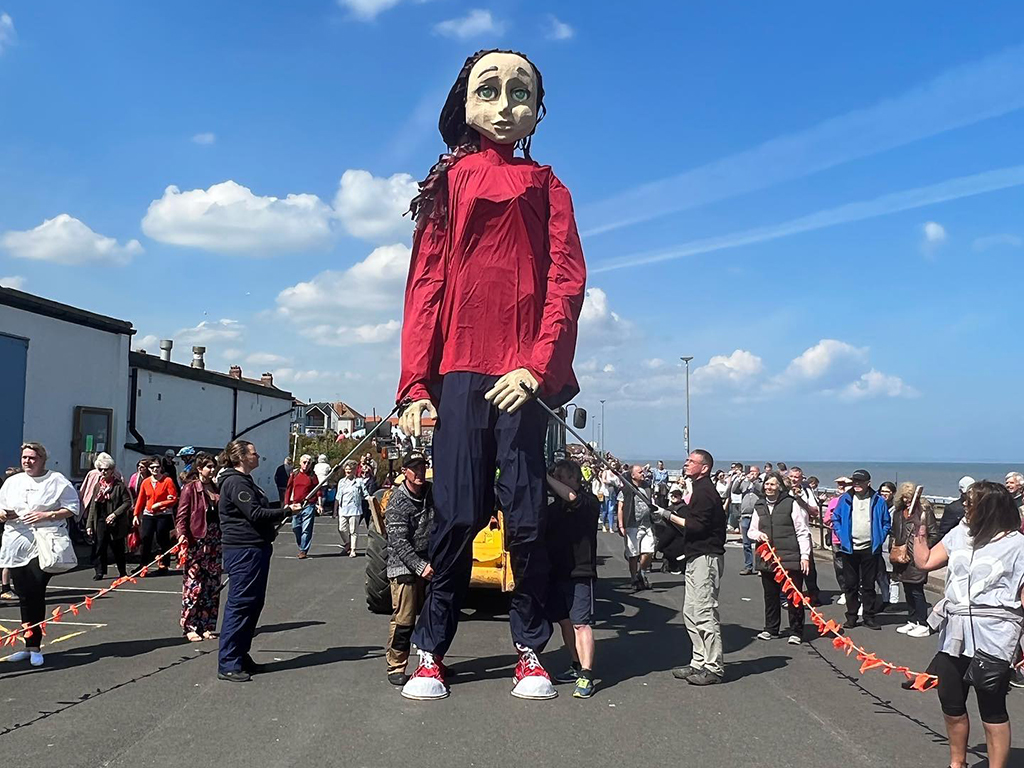 A giant puppet called the Survivor arrived in Withernsea and Hornsea at the weekend in the latest chapter of an epic Odyssey project involving dozens of people from along the Yorkshire coast.

The performance started in Withernsea at 9.30am on Friday, April 29, and the same time the next day in Hornsea, with members of Animated Objects Theatre Company recovering the five-metre puppet from the waters on the beach near the Pier Towers.

The puppet then rested on the beach before she took her first steps in the afternoon as spectators watched along the slipway.

As she walked along, supported by a forklift and the puppeteers, the puppet introduced herself as Aura and told spectators about how she had survived the Trojan Wars before getting washed up on an unknown beach. She also shared her fears of being lost and alone.

The puppet was later welcomed with artwork, music and poetry and received a patchwork blanket made by volunteers from across the Yorkshire coast region to help settle her into her surroundings.

The Survivor will head to Bridlington on Friday, May 6, and Scarborough on Saturday, May 7.

Lee Threadgold from Animated Objects said: “We are so happy to have been involved in this project and seeing it come to life really has blown us all away. The support from locals has been incredible with many coming along to get involved in the day.

“The tale of the Survivor is beautiful, relevant and important, which shows the kindness all people should be treated with. The rest of the performances will really help bring the stories to life, and culture to the coast. Keep an eye out for even more to come.

“We had a fantastic response from people at the events in both towns – and it was great to hear how moved people were and how they each took something different away from the story of Aura.

“We were also delighted to have so many members of local communities involved, with live music, poetry readings and as makers for the giant welcome blanket. Children from Hornsea Community Primary School were also involved in writing and recording a specially devised soundtrack, which will be available to hear at animatedobjects.org after the tour.”

Kerry Carruthers, chief executive of Yorkshire Coast BID, which is supporting the Odyssey project, said: “We are blown away with the support the Survivor received on the first day of her tour along the Yorkshire coast – the public involvement is what brings this project to life. The turnout to welcome the Survivor has been incredible, and we’re expecting even more in the coming days.”

As part of Aura’s story, the puppet will also be touring the full length of the Yorkshire coast on Sunday, May 8, in an open-topped bus. The event will be split up into stages and can be seen from locations across Holderness, the East Riding and North Yorkshire.

Stage 2 will see Aura pass back through Holderness starting at 11.40am in Easington, Withernsea and Hornsea through to Scarborough for 3.20pm.