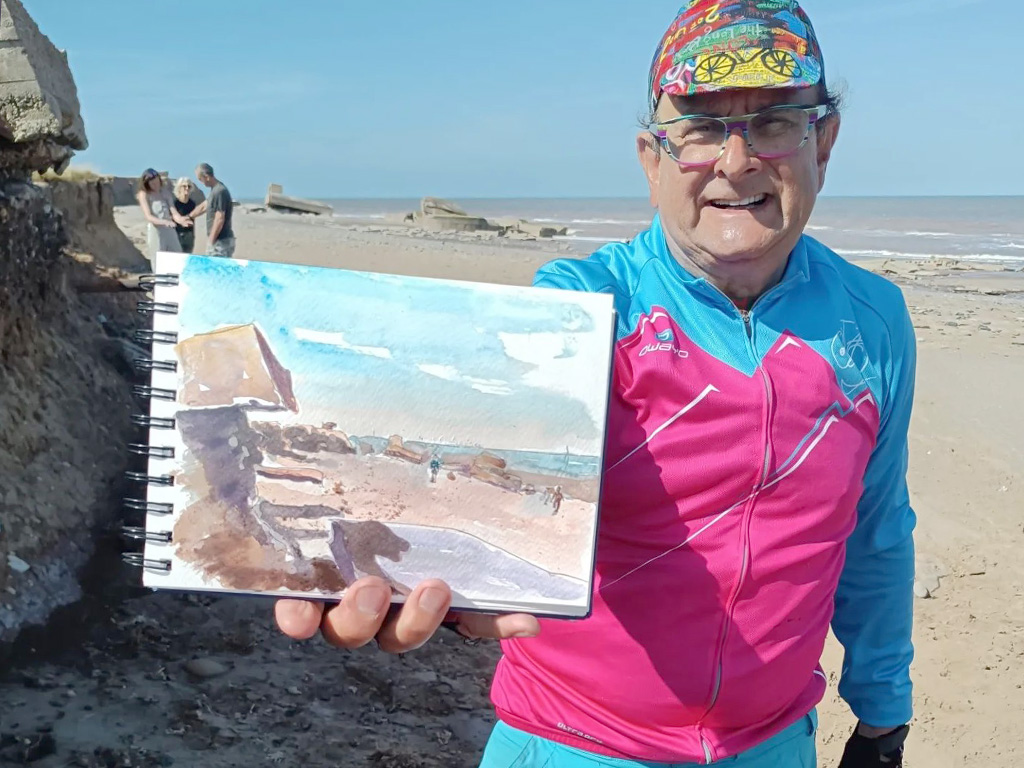 TV presenter Timmy Mallett stopped off in our region during his mammoth round-Britain cycling challenge – and spoke of its welcoming people and dramatic landscapes.

Although Timmy became a household name in the 1980s, presenting the hit children’s TV show Wacaday, which featured his trusty mallet Pinky Punky, he is also an accomplished fine artist, having been inspired by Turner and Constable, and has been sketching local landmarks throughout his journey.

Timmy’s inspiration for the ride is his late brother Martin Mallett, who had Down syndrome, and he hopes to raise awareness of the condition as well as emphasise the need to live in the moment, just like Martin did.

Timmy started his journey at Paddington Station on March 17, and he has since travelled thousands of miles around the UK and created hundreds of paintings.

Dressed in his usual colourful attire and equipped with a set of paints, paintbrushes, pens and pencils, Timmy arrived in the East Riding along the cliff side at Bempton and Flamborough, on Saturday, July 16, before taking the “not so easy’” cycle route south to Skipsea where he started his Holderness adventure while battling strong head winds.

He reflected: “This is an interesting and unusual part of the country, because every other part of Yorkshire calls itself a county apart from the East Riding. Even when you find the signs, they say things like, welcome to the East Riding, which I thought was quite pertinent and poignant in a way, because I’m ‘riding’ my bike into the East Riding.”

From Skipsea, he was able to travel down the back lanes near Mr Moo’s and arrived in Hornsea, where he called on locals to help him find somewhere to stay for the evening.

A local couple called Georgina and Rob helped him by ringing around all the nearby hotels before he found a room. The next morning the couple then invited him to breakfast with him at the Lounge in Hornsea before he headed further down the coast.

Reaching the opening of the Transpennine trail, he was faced with a dilemma: should he go straight into Hull, or take a 70- mile detour down to Spurn?

He said: “I thought, you know what? If I’m doing the coast, I should see what Holderness has to offer. I really was impressed with the Transpennine route in Hornsea, though. You’ve got that spectacular spot at the old railway station and then just on the actual beachfront itself with the big sign. It’s lovely. It’s really something.”

Timmy then made his way through Mappleton and Tunstall, stopping to see the extent of the coastal erosion at each location.

He said: “Tunstall has got that beautiful old church. But they have also got these signs everywhere saying ‘road closed’, and you can’t go any further. I’ve done shows at the Sand Le Mere previously – it’s a very popular, lovely, beautiful resort. But you can’t get to the beach. I went right to the very end where the concrete blocks are. And I stood just past them as far as the tarmac, with great big cracks, looking at them tumbling over the cliff.”

Timmy arrived in Withernsea later in the day. He said: “Withernsea is an interesting town because it doesn’t have a particularly good press. And I think that’s unfair because it’s got something quite dramatic, with the big lighthouse in the middle of the town. I stood on the pavement there next to the school and sketched. I looked at it and thought, this lighthouse is stunning.”

Timmy continued to head south into Holmpton where he met his friends, Michael and Ann Smith (Michael is the Dean of York Minster), and enjoyed a picnic in the village before heading off to Easington.

He then travelled further south, arriving at the old sea defences in Kilnsea, before taking in the view of the Humber and Grimsby from Spurn Point.

He then headed west, arriving in Patrington for his tea at Newton’s Fish and Chip Shop, before resting at Highfield Farm in Ottringham for the evening, ready to set off again the next day.

The final stage of Timmy’s Holderness tour saw him cycle down the bridleway (the old Withernsea to Hull railway line), on the rail trail from Winestead through to Hedon, and into Hull.

Timmy, who said many people across the country had supported him along his journey – including a Holderness couple who approached him with an ice lolly – said much of his journey was unplanned.

He said: “Each day, at about 4pm, I go, that’ll do. I’ll knock on a hotel door and say, ‘Hello, have you got space tonight? Have you got room for me and my bike?’ And if they have, good, I’ll stay there. If they haven’t, I go on to the next one. It’s about being in the here and now – so be here.”

Timmy argued that the Holderness rail trail into Hull could benefit from a significant upgrade.

He said: “There’s a big effort gone into the Transpennine route because everyone goes into Hornsea. Withernsea and the rest of Holderness gets ignored – but it shouldn’t do, because it is an absolute gem, especially Patrington, that is an absolutely marvellous village.

“It is a beautiful area.”