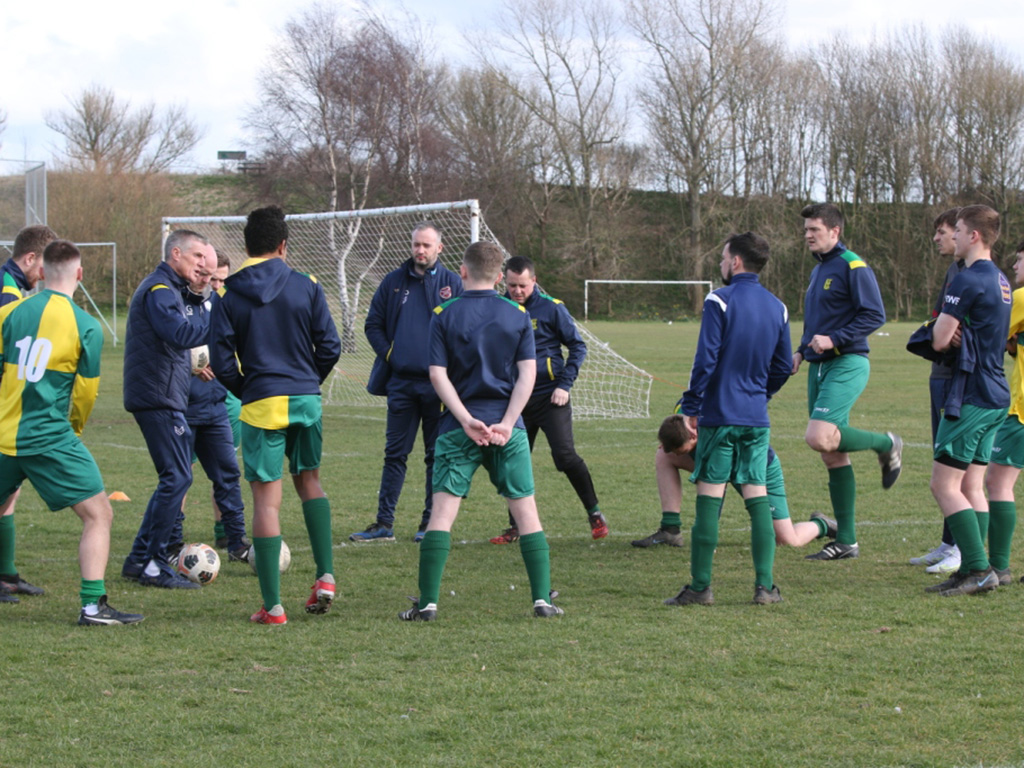 As the Eastenders’ difficult 2021-22 campaign enters its final straight, it isn’t all doom and gloom in the camp – in spite of another miserable set of Saturday results last time out.

Indeed, if anything, there is renewed positivity among the management, as the performance of those players who remain committed to the cause helps forge a clearer path for the way forward.

First Team manager Craig Foster was keen to praise his side’s “effort” if not their application in a 4-1 loss at Chaos United that leaves his side still rooted to the foot of Humber Premier League Division 1.

More specifically, he was left to bemoan some rare below-par individual performances and a collective inability to “match a physical side”, as the main contributory factors behind his team’s biggest league defeat since October’s debacle at Hessle.

However, the manager was also keen to point to the positives, one of which was the performance of yet another promising teenager, Harvey Clarke. The 16-year-old substitute marked his debut off the bench (and only his sixth appearance in men’s football) with Easington’s only goal.

There is no game for the locals this weekend but when they return to action at home to Driffield EI on March 26, Foster and Smalley will hope their team can gain the win that will hopefully act as a springboard for the remainder of the season.

Foster’s side at Chaos included several lads who would normally be found in the County League squads and the knock-on effect of this – allied to a glut of injuries, illness and other factors – meant the Reserves’ ranks at Withernsea on Saturday were more than half-filled with players from the third and fourth teams.

As such, player/manager Brad Bowden was delighted by the way his team stuck to their task despite a 3-1 defeat.

Inadvertently, perhaps, the attitude and performance of several of those players drafted in on Saturday has shown the way forward as the club plans for next season. Indeed, several of them may find themselves back in action on Saturday when the Stiffs are away at Division 1 side AFC North in the league’s HE Dean Cup (2pm).

The only other piece of Saturday action involves the Fourths. They are scheduled to host Bridlington Rovers Academy at Low Farm in ER County League Division 7 (2pm), having been forced to concede last weekend’s trip to AFC Cottingham Reserves.

The Awd Ezzies are inactive this weekend but last Sunday they got themselves right back in the thick of the Hull Vets League Division 5 promotion race thanks to an eight-goal romp at Little Weighton; a result that lifted them back up to third behind leaders Northern Wanderers and Swanland.

Away from the action, Saturday week (March 26) sees the Walking in a Wilson Wonderland event taking place at the Granby. Subtitled “An evening in memory of Mickey Bo”, it will provide the opportunity for past and present players, along with members of the public to share memories of this great servant of local football. This can be done either by reminiscing with friends or – if you so wish – publicly as part of the evening’s entertainment. Music comes from excellent local group, The Pub Lads (and guests!) with all proceeds from the night going to the WISHH charity for Wards 30 and 32 at Castle Hill Hospital.

We can also now reveal our plans for the club’s 75th anniversary, which will take the form of a three-course sporting dinner to be held in the Circle Restaurant at the MKM Stadium on Saturday, September 24. Guest speaker is former England international Peter Beardsley MBE, with entertainment also from MC/comedian John Gillan. Tickets for the event are priced £40 each and all enquiries are to be directed via Daniel and Stuart Campbell on 07794 572250 / 07792 770475.

Finally, special thanks go to Yvonne Brazier, Michael Penny and those who helped clean up the “Old John” Stand after the mess caused at the ground recently. Your efforts are very much appreciated.
For up-to-date news, check out our club website at easington-united.co.uk, along with our social media pages on Facebook, Instagram and Twitter (@EasingtonUtd).