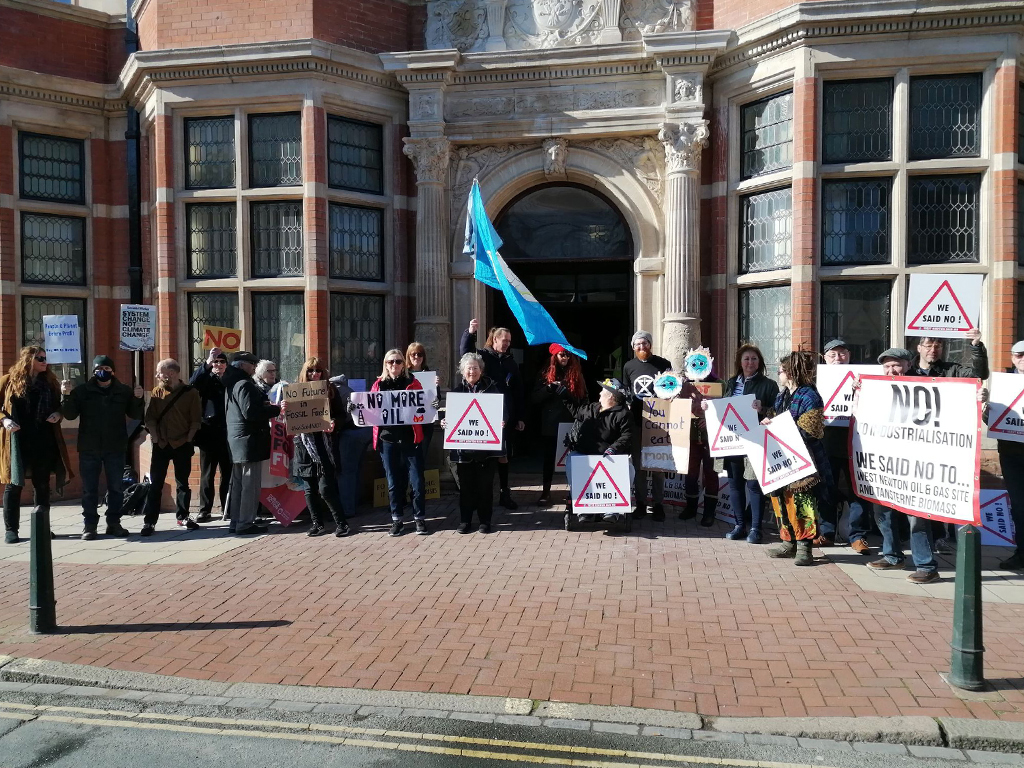 Plans proposed by Rathlin Energy have been approved despite opposition from local West Newton Said No! protesters and Fossil Free East Yorkshire.

As previously reported, Rathlin Energy submitted plans to add six more wells to its West Newton site, but these were turned down last year. Further scaled-down proposals were submitted earlier this year for four wells instead of six. These plans have now been accepted despite significant opposition from campaigners who cited disruption to the local environment as one of the many causes for concern.

The planning permission allows drilling horizontally underneath the villages of West Newton, Marton and Withernwick, to treble the size of the site, to drill four new wells (making a total of six), and to start producing oil for 25 years.

The now accepted revised plans also acknowledged the impact of HGV traffic in the area, proposing a reduction in the number of vehicles needed to transport aggregate during construction of the site. They proposed that HGV access would be reduced to 132 daily vehicle drops (66 arrivals and 66 departures). The revised plans set out to address these concerns with the introduction of new passing places in Pasture Lane between Burton Constable Road and Moor Lane. The passing places are said to prevent damage to existing verges and allow room for two vehicles to pass.

The plans also proposed two HGV routes: an orange (southern) and blue (northern) route on the A165 via Langthorpe Road and east along Pipers Lane. The orange route would be via Burton Constable Road and Pipers Lane.

Finally, according to the plans, 5,150 native trees, including holly, would be planted on the perimeter mounds around the site, with large trees also planted at the site entrance, as well as 290m of hedgerow around the southern and eastern edge of the wellsite to soften the appearance of the 2.4m-high perimeter fence.

A spokesman for Rathlin said: “Rathlin Energy (UK) Ltd and our industry partners welcome the planning committee’s approval of the application for drilling and production at the West Newton A site and the variation of condition to allow further exploratory drilling at the existing West Newton B site.

“We would like to thank the officers and elected members for the time and effort they have taken to understand, appraise and determine this application and their acknowledgement of the refinements we have made as a result of councillor and community consultation.

“At a time when people are feeling the pressure of high energy and goods prices, which may become higher still as the UK and other countries limit Russian imports of oil and gas and other commodities, Rathlin Energy (UK) Ltd’s projects will support security of supply, be compatible with the path to net zero, contribute to reducing the supply gap and bring meaningful local inward investment and jobs to the East Riding.

“We will deliver on our promise to continue to be a good neighbour and now look forward to working with the planning authority to discharge the conditions and starting work on this locally and nationally important project.”

Richard Howarth, of Fossil Free East Yorkshire, said: “Fossil fuels must stay in the ground for any chance of a ‘liveable future’. The head of the UN put it plainly: oil companies ‘are guilty of arson of our only home. … Delay means death.’

“Our government and councils have a duty to act now to protect us, and today they failed. We gave them robust grounds to refuse this application on traffic. But some councillors mistakenly saw this as a choice between the needs of residents and the nation. In fact, it is a choice between the profits of an oil company, and a liveable future for all.

“They sided with the oil company and poured oil on the fires of climate change. But there is still a brief window to act; climate change is not going away, and neither are we. Quite the reverse. We will continue to fight in any way we can.”

Sarah Jane Hockey, of the West Newton Said No! group, said: “We are extremely disappointed that the planning committee has clearly been swayed by recent events in Ukraine and chose to ignore the strong material considerations and evidence put forward to reject this application.

“In doing so they have condemned the local communities to over 25 years of misery, fear, and danger. The planning officers, highway department and committee have failed to follow due process. The roads on both proposed routes are neither safe nor suitable. We are now looking at options going forward.”